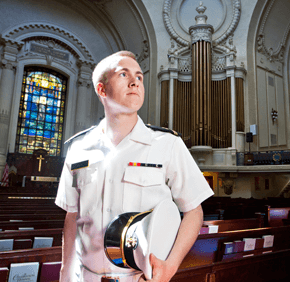 ANNAPOLIS – The class ring is a milestone for midshipmen at the U.S. Naval Academy. Bought during their third year, they’re allowed to wear it only for the number of days corresponding to the last two digits of their graduation year.

Midshipman Tim Cadigan, Naval Academy class of 2013, wore his ring for the permitted 13 days. When he took it off, he replaced it with his class ring from Calvert Hall College High School in Towson.

Across the Archdiocese of Baltimore, prospective plebes and graduates alike attribute their preparation for and success at the Naval Academy to the formation they received at Catholic high schools.

“A major focus at Calvert Hall is on being a man of faith and of service to the community,” Cadigan said. “For me, the mission of the U.S. Naval Academy lines up with this well, especially with respect to my development as a moral leader.”

In addition to a solid academic and athletic foundation, Calvert Hall provided a good base for understanding what constitutes ethical leadership, he said.

Many Catholic schools in the Archdiocese of Baltimore have a legacy of sending men – and, since 1976, women – to the Naval Academy.

St. Mary’s High School in Annapolis, a short stroll across the City Dock, alone has sent 82 men and women to the Naval Academy since 1988, the earliest year in the academy’s store of feeder data. Over the same period, Calvert Hall has sent 39 men, and Loyola Blakefield in Towson 38.

“Moral development is purposely listed first in our mission statement, underscoring the importance the Navy and Marine Corps place upon ethical leadership,” a Naval Academy spokeswoman told the Catholic Review via e-mail.

Of the approximately 4,400 midshipmen, 37 percent identify as Catholic, according to the academy. By comparison, Catholics comprise less than 24 percent of the U.S. population, according to the Pew Forum on Religion and Public Life.

Joe Boddiford graduated from Calvert Hall in 1979 and the Naval Academy in 1983. His time at Calvert Hall taught him discipline, which he needed as a midshipman and naval officer he said, citing both schools’ emphasis on mental, moral and physical development. The formation he received as a young man has shaped every facet of his life, said Boddiford, who now works in finance.

Jamie Dubyoski, 18, feels the same way about Loyola Blakefield, where he is a senior and, as a Naval Academy appointee, preparing for Plebe Summer, which begins with Induction Day June 28. Loyola Blakefield places a “huge emphasis” on service to others, Dubyoski said, which translates into service to one’s country.

Don and Betty Anderson saw their two sons, both of whom graduated from the Naval Academy, also grow in character while at Calvert Hall, which was founded in 1845, the same year as the Naval Academy. Don Jr. and Zack, who are 27 and 23, respectively, were competitive swimmers and skilled water polo players – which demand early rising, good time management and personal discipline. Their Calvert Hall education was an extension of what they learned at home, Betty Anderson said.

Pat Brady, who chairs the religion department at Archbishop Spalding High School in Severn, said his school holds students accountable for their work, which prepares them well for college in general and service academies in particular.

“This is a highly disciplined school,” he said. “There’s even peer pressure regarding their excellence.”

A graduate of the Naval Academy, Brady encourages Spalding students to consider serving in the military, and mentors those who are looking at service academies.

Like many who attend the Naval Academy, Hamilton, 18, has family connections. His father graduated from the academy in 1984 and now teaches there. Hamilton’s house is on the Naval Academy Yard, and his regular interactions with midshipmen played a role in his decision, he said.

“I only decided last year that I would pursue a military career,” said Hamilton, who now hopes to be a fighter pilot. “At first, I didn’t want to follow the same path, but then I realized this is what I’m meant to do – to really be part of something bigger than yourself.”

Classmate and fellow academy appointee Caroline Zotti’s dad is a career Marine, and her mother teaches at the academy. Both inspired her, said Zotti, who aims to become a Navy doctor.

“For a long time I was thinking about choosing a civilian school, but I realized that it’s something that’s so much of a part of me that I can’t choose a different world,” said Zotti. “There’s people who belong there, and that’s kind of what it came down to. I really do want to serve my country, and that’s something that you can’t get anywhere else.”

Not every student who attends the academy goes there because they want to fly airplanes, be on submarines or join the Marine Corps, said David Gibson, the college advisor for St. Mary’s High. A retired naval officer, he worked as the Naval Academy’s admissions director in the 1980s.

Some, he said, are primarily attracted to the Academy because it offers a good education and develops leaders.

Since 1988, St. Mary’s has sent more graduates to the Academy than any other Maryland school. Close behind are Annapolis High School and Broadneck High School, the two public schools nearest the Academy.

Students who demonstrate commitment, and particularly a faith commitment, are attractive to the Naval Academy, Gibson said.

Local Catholic high school grads attend the U.S Military Academy in West Point, N.Y., and the U.S. Air Force Academy in Colorado Springs, Colo., but not in the numbers they attend the Naval Academy, according to data requested by the Catholic Review.

The U.S. federal government pays for tuition, room and board at the five U.S. service academies. Appointees agree to serve as military officers for several years after graduation, and many pursue military careers.

That service means that the education isn’t free, said Betty Anderson, the mother of the two Calvert Hall and academy grads.

“For us, that payback was pretty huge,” she said.

Her son Don is in the Navy SEALs and recently returned from his second tour in Afghanistan; he also served two tours in Iraq. Zack, his brother, aspires to the Army Special Forces.

“To willingly offer one’s life for someone else is really quite noble,” said Cardinal O’Brien, who served as an Army chaplain in Vietnam during the war there. “It’s one of the high ideals of our faith – to give ourselves away for others – and it is coincident with the military profession.”

With its blue-green dome, the Naval Academy Chapel is an Annapolis landmark. It was built between 1904 and 1908, and hosts both Protestant and Catholic liturgies that are open to the public. Sunday Mass is celebrated at 9 a.m. in the main chapel, and at 11:30 a.m. in St. Andrew’s Chapel, on the main chapel’s lower level. St. Andrew’s Chapel also hosts a daily Mass at 12:50 p.m.

While at the academy, Cadigan’s devotion has included praying the rosary and daily Mass, he said.

On a campus so focused on camaraderie, he often tries to find silence alone, he said, as he surveyed the Naval Academy grounds on the banks of the Severn River.

“Somewhere as beautiful as this,” Cadigan said, “lends itself to reflection.”

To navigate the slide show below, click on the arrows.