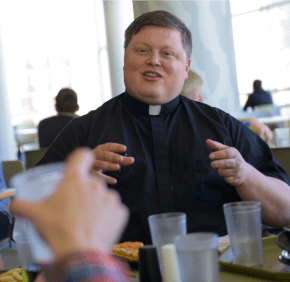 “My schedule is like Jello
TOWSON – When Baltimore Archbishop William E. Lori mentioned the need to reach out to the massive student body at Towson University, Father Matthew Buening, then serving as pastor of St. Paul Parish in Ellicott City, was moved to stand up.
“That’s a great idea, Archbishop,” he said, according to his recollection of the meeting, which included several clergy. “You’re absolutely right.”
The archbishop was apparently moved, too. When the 2015-2016 school year began, Father Buening found himself moving into the Newman Center, located at 7909 York Road in Towson, to begin his new role as Catholic chaplain at Towson University.
The Newman Center building, a two-story home set high and secluded on a hill, accessed via a long driveway lined with gingko trees, was sold to the Archdiocese of Baltimore for use as a campus ministry center in 1966. It – and all the Newman Centers that minister to Catholic students at non-Catholic universities around the world – was named for and inspired by Blessed John Henry Newman, an Oxford University scholar who was ordained an Anglican priest and later converted to Catholicism, eventually being named a cardinal by Pope Leo XIII in 1879.

As Father Buening prepared for Sunday Mass that first weekend at Towson, he wondered if anybody would show up.

“I was getting nervous,” he remembered. “Then, the chapel filled up.”

According to U.S. News and World Report, there are almost 19,000 undergraduates at Towson, the second-largest public university in Maryland.
“That’s quite a big parish,” Father Buening said. “The youth are our lifeblood; they’re the future of our church.”
He sees huge potential, but is also aware of that demographic’s serious challenges.
“Eighty percent of those who lose the faith do so before age 23,” he said, speaking with some personal experience.
“I had left the faith, pretty much, in college,” the 39-year-old priest revealed, but his next words were hopeful: “It was a priest that brought me back.”

His mission for active Catholics is to “not let them drift away in the first place,” as well as to evangelize those with little to no foundation in the faith.

Following an April 20 noon Mass and lunch, Father Matthew Buening, chaplain at Towson University, joins students Peter Myers, Luke Koski, and Zach Albers for a walk on a beautiful Wednesday afternoon. Father Buening became chaplain at the Baltimore County campus during the 2015 fall semester as part of the Archdiocese of Baltimore’s college campus ministry efforts. (Kevin J Parks/CR Staff)
Father Buening employs several strategies to those ends.
First, he said, he simply spends a lot of time talking to students – relating to them on their level. He answers his phone late into the night and is up until 2 a.m. on Friday evening “Newman Nights.” He walks the campus and engages students in conversation.
“What they desire and want, more than anything else, is to become friends and get to know each other and their chaplain,” he said.
Though he didn’t expect it, Father Buening also finds that part of his job quite rewarding.
“The relational aspect of being a college chaplain has been the biggest surprise and the biggest joy,” he said.
Intellectual discussions among the hardwoods and lawns of academia are certainly pleasant, but do they accomplish anything?
Father Buening again recalled his own undergraduate years at James Madison University in Harrisonburg, Va. – his own big questions and the responses offered by the priest who would help bring him back to faith.
“I thought, ‘Wow – these aren’t just answers; they’re beautiful answers,’” he said.
Before a chaplain can share those answers, however, the conversation has to begin.
“One of the biggest problems is getting the word out that we exist,” Father Buening said. “A little flyer can only do so much.”
He offers Masses and hears confessions every day. Between the two Sunday Masses, at 11 a.m. and a “last chance” at 9:30 p.m., he gets about 75 students, he said.
“We started out small, and we continue to grow, though we still need more,” Father Buening said.
He’s not above harnessing the power of a public spectacle. While the archdiocese was celebrating 24 Hours for the Lord in early March, with eucharistic adoration and ample opportunity for the sacrament of reconciliation, Father Buening brought the same spirit to Towson University, setting himself up in a Lucy van Pelt-style booth that let students know that “The priest is IN” to hear their confessions.
He didn’t get the crowds that St. Padre Pio was known for, he said, but he had some conversations and opportunities to nourish souls with food for thought.
Shared responsibility
Helping Father Buening with his ministry are missionaries from the Fellowship of Catholic University Students, which has a presence on 113 college campuses.
“They’re kind of like my eyes and ears on campus,” Father Buening said. “I’m on campus, too, but with my collar, you can run from me if you want too.”
Amber Fessler, 25, has been ministering at Towson University since August 2015.
“Every day is a little bit different,” she said, noting that herself and the other two FOCUS missionaries meet every day with each other and with Father Buening, and spend time in self study, “to grow in virtue and in our relationship with the Lord.”
Fessler said that most of the students she engages happen to have a Catholic background.
“It could be because objectively that’s true, or because we pray and the Lord leads us to them – we don’t know,” she said.
She called the Newman Center “such a blessing, for the way they welcomed us.”
Junior Zach Albers, a criminal justice major, recently discovered the Newman Center.
“When there’s a ton of work, (being involved with campus ministry) makes it less stressful,” he commented. “I can go and clear my mind and then be ready to work.”
He called Father Buening “one of the best priests around.”
“He’s relatable, and his homilies are relatable to students,” Albers said. “It’s set up so everyone can understand, whether you’re ready to be sent out to others or still working on your own faith.”
Senior Luke Koski, majoring in philosophy and psychology, is one of those ready to be sent, though it took him some time to reach that point.
“I wasn’t sure I wanted to continue living the faith to the degree I did in high school,” said Koski, a graduate of nearby Calvert Hall College High School who had served as a peer minister at St. Isaac Jogues Parish in Carney.

“I hit a low point, you could say, and then I went to Newman,” he added. “It was kind of scary walking up that dark driveway by myself, but everyone inside was so cheerful and so joyful.”

Small in numbers, yet strong in faith, members of the Catholic community at Towson University attend the April 20 noon Mass celebrated by Father Matthew Buening at the West Village Commons. Father Buening was assigned to the Baltimore County campus during the 2015 fall semester as part of the Archdiocese of Baltimore’s college campus ministry efforts. (Kevin J Parks/CR Staff)

Koski began his involvement under Father Thomas Ryan, Father Buening’s predecessor. He shares his faith with his fellow students and even sometimes his professors.
“They always somehow find me,” he said of his peers open to that conversation.
“I will be working in a group project, and people will start talking about faith … Why not talk about it? Most people are open to talking about it.”
For Father Buening, it’s one more aspect of higher education.
“Everything about this university is engineered to make these kids the best they can be,” he said. “It’s exhilarating and intoxicating to be a part of it, of all these students studying hard, trying to grow in wisdom and knowledge and, hopefully, in virtue.”
On April 24, Father Buening’s first year will reach a culmination of sorts, as Archbishop Lori celebrates 11 a.m. Mass with students at the University Union building on campus, 8000 York Road.

For more information on the Newman Center at Towson University, visit tucatholic.com.

To see the video from The Catholic review’s visit to the Newman Center, click here.