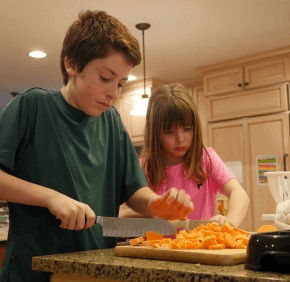 TOWSON – It’s “no parents allowed” this Lent in the Smolka family kitchen.

“The first time [they cooked], they said, ‘Get out!’” said Bo Smolka, father to young chefs Matt and Katie Smolka. “They thought I was hovering too much.”

Using recipes distributed in literature from Catholic Relief Services’ Rice Bowl program, the Smolka children are taking one night a week this Lent to cook dinner for their parents – and, in the process, are learning about what families in other parts of the world eat and how those families live.

The family already took suggestions that Baltimore-based CRS made for Lenten observance, like fasting from eating out and putting change in the bowl before every meal.

“One of the toughest ones is, we’re fasting from all beverages except for water,” seventh-grader Matt explained. A fan of cooking shows, he always wondered what it would be like to take the suggestions a step further and “do the rest of the recipes. This year, we actually did it.”

The CRS Rice Bowl is distributed in schools and parishes across the Archdiocese of Baltimore during Lent. Gifts from the Rice Bowl are used to support CRS humanitarian and relief programs around the world.

Along with the familiar cardboard donation bowl meant to stay on family dinner tables during Lent, the program provides calendars, action plans and suggestions to help families get the most out of the liturgical season.

According to CRS, more than 13,000 faith communities participated in the Rice Bowl in 2014.

This Lent, the Smolka kids have cooked Tanzanian ugalle, Nicaraguan gallo pinto and West African peanut-and-sweet-potato stew. On Mar. 13, second-grader Katie – who gave up chocolate for Lent – took care of chopping up onions and garlic while Matt worked on cubing sweet potatoes. The siblings consulted the CRS recipe throughout, wielding kitchen implements with ease.

“Cooking together is fun,” Matt said. “You have someone else to help out if you mess something up. There’s someone there to double check and makes sure you did the recipe right.”

“The Rice Bowl dials in Lent and focuses it for them,” Bo Smolka explained. “It’s been a good experience.”

While sacrificing for Lent can be difficult, Matt says, Katie explained that it’s good to realize “that you’re not made of sugar anymore.”