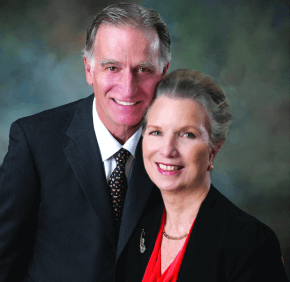 By Erik Zygmont
ezygmont@CatholicReview.org
The title of the 2016 Archbishop’s Annual Appeal, “A Light Brightly Visible,” describes the faith of its co-chairs, Dr. Ellen Yankellow and William Chapman, her husband.
“I see faith as a gift,” Yankellow said. “We live it and love giving back.”
The appeal’s title also recalls “a kind of very ancient image of the church that was referred to during the Second Vatican Council,” explained Baltimore Archbishop William E. Lori, who used it on his June 2015 pastoral letter.
The light is Christ, the archbishop said, and “it becomes brightly visible through the church and her ministries.”
Yankellow and Chapman attest to that as parishioners of the Catholic Community of St. Francis Xavier in Hunt Valley.
“Our goal is to get as many individuals and parishes involved to embrace the appeal and to understand that funds raised go to the missions of the parishes and helping those less fortunate,” Yankellow said.
They are the first members of the laity to chair the appeal.
“The work of the church is a partnership between the clergy and the laity, and because the (annual) appeal is all about the ministry of the church, I felt it was important that the leadership include not only myself and my brother priests, but also the laity,” Archbishop Lori said, adding that Chapman and Yankellow are “extraordinary leaders in the community and in the church.”
Yankellow launched Correct Rx Pharmacy Services Inc. in 2003. Today, it provides medications and clinical services to “those who are most disenfranchised,” she said, including inmates in the state prison system, patients in institutions and residential treatment programs, and several Catholic Charities facilities, the Neighborhoods at St. Elizabeth and Caritas House among them.
On the side, “she’s constantly playing the ‘board’ game,” Yankellow’s husband commented, noting her penchant for active leadership in various philanthropic endeavors.
She was recently appointed to the board of trustees for the Carter Center, which in the near future will announce the complete eradication of Guinea worm disease, which numbered 3.5 million cases of the nasty parasite in 1986.
Chapman, a former Marine who served in the Vietnam War, spent most of his career in large-scale construction including high-rise restoration, and joins Yankellow in doing good works.
The goal of $9 million has been set for the appeal, a substantial increase over last year’s goal of $7.6 million.
“The archdiocese is present in communities that have tremendous need, much of it at the local level, so we’re working hard as a church to meet that need,” Archbishop Lori said, noting that parts of Baltimore City but also parts of the western and Beltway reaches of the archdiocese exhibit that need.