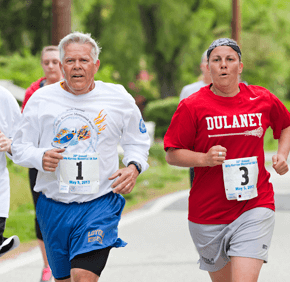 By Paul McMullen
pmcmullen@CatholicReview.org
TOWSON – Loyola Blakefield School renewed one of its younger traditions May 5, when the 20th annual Billy Korrow Memorial 5K footrace had more than 300 finishers, and nearly as many family and friends out supporting the scholarship fundraiser.
Billy Korrow was a 12-year-old seventh-grader at the school in January 1993, when he died of a blood-clotting problem. He loved camping and the beach, and played soccer and lacrosse for the Dons’ middle-school teams.
Bill Korrow, his father, has taught physical education at Loyola Blakefield since 1970. The year after their son’s death, Korrow and his wife, Jane, now parishioners of the Catholic Community of St. Francis Xavier in Hunt Valley, launched the race with the help of alumni and other staffers at the school.
To view a slideshow of the event, navigate the arrows below.
Interested in purchasing any of these photos? Click here.
Like his three sisters, Billy Korrow began his education at the former St. Anthony of Padua School in Gardenville. Kristi Korrow, a Mercy High graduate who teaches English at Dulaney High, also coaches girls’ lacrosse and brought her team to the roadrace.
Bill Korrow, 65 and a lifelong runner, won the 60-69 age group in 27 minutes, 14.7 seconds, on an up-and-down course in which the second mile has a climb more daunting than mile 3 of the Baltimore Marathon.
The event has taken on family connections well beyond the Korrows.
The top finisher was Dons’ sophomore Michael Wegner, one of the state’s top 3,200-meter runners, who also happened to design the t-shirt all entrants received.
Wegner was timed in 16:59.4. His brother, Kevin, a Loyola Blakefield freshman, was second in 17:34.4, and Kathleen Wegner, their mother, was tops in the women’s 40-49 age group, in 22:10.8.
Age-group medal-winners on the women’s side included Caitlin and Kieran Brune, whose father, Joe, was the Dons’ longtime football coach. In semi-retirement, he still helps that program and St. Ignatius Loyola Academy in Baltimore.
Entry fees and sponsors perpetuate the Billy Korrow Scholarship Fund, which awards a partial scholarship to a Loyola Blakefield student in each of its grades 7-12.
Billy Plunkett, the recipient in the Class of 2014, missed the race, as he was in Pennsylvania playing in a basketball showcase for NCAA Division II and III prospects. A starter for the Dons’ basketball team and back-up catcher for the baseball team, he learned of the Korrows’ largesse while playing J.V. football.
“Mr. Korrow coached the wide receivers and defensive backs,” Plunkett said. “One day after practice my freshman year, I was pulled aside and told I was going to receive the scholarship. It came as a surprise.”
A parishioner of St. Margaret, Bel Air, Plunkett’s service includes being a leader at Loyola Blakefield’s annual freshman retreat.
To view results of the Korrow 5K, click here.
Copyright (c) May 6, 2013 CatholicReview.org
PrevNext