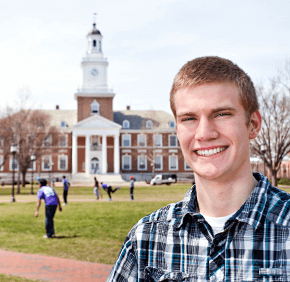 By Maria Wiering
mwiering@CatholicReview.org
Twitter: @ReviewWiering
Andrew Guernsey, a freshman at The Johns Hopkins University in Baltimore, anticipated some push-back when he sought to resurrect the school’s pro-life organization.
He didn’t expect the group would be denied official club status.
The university’s Student Government Association rejected the club’s application March 12, citing concerns about harassment and the use of graphic images.
The group, Voice for Life, is awaiting an April 9 trial hearing before the Student Government Associations’ Judiciary Committee.
“I expected people maybe not to approve, but at the same time being able to separate their personal views from being able to tolerate differences of opinion on campus,” Guernsey said. “But that didn’t happen.”
According to the SGA, Voice for Life’s participating in sidewalk counseling “clearly violates the JHU Harassment and Code of Conduct policies.”
Guernsey, 18, said the SGA did not ask for the club’s definition of sidewalk counseling, which he said qualifies as “protected free speech.”
The SGA also took offense at the Center for Bio-Ethical Reform’s website, which Voice for Life linked to its website. The Center for Bio-Ethical Reform uses images of aborted fetuses in its displays, which it has brought to public property near Johns Hopkins’ Homewood campus in the past.
Voice for Life does not plan to display photos of aborted fetuses, Guernsey said.
“These reasons that they’re giving are pretext that the student government has because they’re ultimately intolerant of pro-life views being expressed on campus,” he said. “They want to censor the message in the way they think a pro-life view should be expressed.”
Freedom of speech is protected by Johns Hopkins’ student government constitution, Guernsey said.
A native of Ave Maria, Fla., Guernsey thought that a pro-life group was already established at Johns Hopkins when he enrolled, and he planned to join. When he discovered it had dissolved due to member inactivity, he decided to lead efforts to re-establish it.
In January, he launched a website inviting other students to join the group, which he said aimed to “make the campus more aware of pro-life issues.”
“I saw it as an opportunity to reach out to future medical doctors, who are future leaders in the medical industry, so that they can have a chance … to discuss important life issues like abortion, euthanasia and embryonic stem-cell research, which are prominent issues at this university,” he told the Catholic Review.
The group intends to host pro-life speakers, sponsor debates, hang posters, advocate for information for abortion alternatives to be available on campus, have a presence at student fairs, and survey students on their views. Its members also plan to attend pro-life events, volunteer at pregnancy help centers and offer sidewalk counseling at an abortion clinic near campus.
Official group status grants the group club funding, the use of rooms in campus buildings for meetings and the right to hold events on campus.
Students opposing Voice for Life’s official club status have expressed concern about the group using “hate speech.”
In an email obtained by the national pro-life organization Students for Life of America, a female student wrote, “I understand people’s right to freedom of speech, but this is a private university, and as such, we have the right to protect our students from things that are uncomfortable.”
On March 26, Guernsey wrote to Caroline Laguerre-Brown, Johns Hopkins vice provost for intuitional equality, to ask whether sidewalk counseling, as the group described it, constituted harassment under university policies.
In an April 3 response, she said that it did not.
Kristan Hawkins, president of Students for Life of America, said in a statement that Voice for Life is “not alone” in its struggle to gain official university recognition.
“Time and time again we have seen this happen, especially on ‘private’ college campuses, where a handful of students believe it is their duty to limit discussion of abortion on campus,” she said. “College is where you should be forced to think about hard issues like abortion and learn to defend your beliefs.”
An official pro-life club existed at Johns Hopkins from 1996 to 2010. Dominican Father John Paul Walker, chaplain for the Johns Hopkins Catholic Community at Ss. Philip and James in Charles Village, was among the group’s founders when he was a Johns Hopkins student.
Guernsey, a Catholic, is active in campus ministry, and Father Walker has supported him and other group members, he said. Like Guernsey, he thinks it is important for Johns Hopkins students to discuss life issues.
“This place is forming a generation of medical professionals, of public health professionals, people who will be dealing with issues of population and poverty and things like that. Often there’s a great ignorance about the reality of abortion at the medical level and psychological level,” Father Walker said.
“It’s a travesty, I think, for a school of the stature of Johns Hopkins, and the importance of Johns Hopkins on the national and international level, not to have a group to bring to light these issues,” he added.
Guernsey points to Johns Hopkins’ motto, “The Truth Will Set You Free.”
“Johns Hopkins has an instructional commitment to freedom of speech and expression,” he said. “We hope the student government follows the university’s lead on this case and does the right thing to protect free speech for all students.”
April 8, 2013 CatholicReview.org
PrevNext