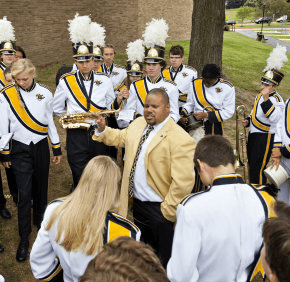 By Elizabeth Lowe
elowe@CatholicReview.org
Twitter: @ReviewLowe
BEL AIR – While some Baltimore-area schools closed early and cancelled sports activities Sept. 11 due to temperatures in the 90s, The John Carroll School’s marching band spent an hour outside in the baking sun practicing for upcoming performances.
“On the field and page one, please,” Marc Bolden, John Carroll’s director of instrumental music, said into a megaphone to the school’s marching band. “Woodwinds can you hear me? Brass can you hear me? We’re going to run though the whole thing.”
After the band twice practiced its halftime show on Gerry Gray Memorial Field, Bolden critiqued their performance.
“Great intensity throughout the show,” Bolden said. “Don’t rush the hard stuff. Slow down. I’m very happy.”
The band was practicing for a performance during the school’s home football opener Sept. 14, when the Patriots lost to Delmar High School of Delmar, Del.
“It is very similar to any other group activity or sport,” said Bolden, who also directs John Carroll’s concert band and orchestra. “In football they run the same play over and over again to make sure it’s perfected. We will run the same drill page over and over again. Everyone here has to know what they’re doing.”
Watch a video of the band practicing.
A 2003 graduate of John Carroll, Bolden played trumpet and then percussion in the school’s marching band, which was established in 1974. He was a drum major his junior and senior years, then played percussion in the marching band at the University of Dayton in Dayton, Ohio.
“Marching band is something I love,” Bolden said.
In addition to performing its field show routine, the band also plays tunes in the bleachers. Their repertoire includes classic rock tunes from artists such as Aerosmith and Elton John, said Bolden, who doesn’t require students to memorize music.
“I try to make it fun,” Bolden said. “I try to pick challenging music, but stuff that’s attainable. I want the kids to be learning while they’re having fun. If they’re not enjoying it, they’re not going to want to do it.”
This year’s marching band is comprised of 14 freshmen, 11 sophomores, nine juniors and eight seniors, including two drum majors, Bolden said. Dominated by females, the band has 17 woodwinds and 11 brass. The remainder is made up of percussion. The unit includes a seven-person color guard.
“It’s a place you feel like you can belong to,” said Michael Sanphillipo, a sophomore and member of the drum line, who noted he always wanted to be in the marching band.
Drum majors Alex Gromacki and Travis Nelson, both members for four years, are thrilled to serve as student leaders who direct the band.
“It’s a lot different than being on the field,” Gromacki said.
Nelson agreed.
“It’s a totally different dynamic in terms of leadership,” he said. “We’re excited to be representatives of our school in this aspect.”
The band’s season, which began in August with two weeks of band camp, typically goes until November.
The marching band, a graded class, rehearses four times a week during the school day. As the season dwindles, students transition to concert band.
The marching band occasionally performs other times throughout the year, specifically in local Christmas and Independence Day parades. In June 2014, the group expects to perform at Walt Disney World’s Magic Kingdom Park in Orlando, Fla.
Students do not audition for marching band.
“If you want to be in,” Bolden said, “you’ll be in.”
A no-cut policy does not mean it is any less demanding.
“Marching band is a sport,” Bolden said. “It requires physical endurance, it requires precision. It’s not something that you can walk in and do. It requires mental and physical and emotional concentration.”
Also see:
Inside Sports: Ellie Gonzalez is national-class runner at Catholic High
Inside Sports: Spalding’s broad-based program decades in the making
PrevNext