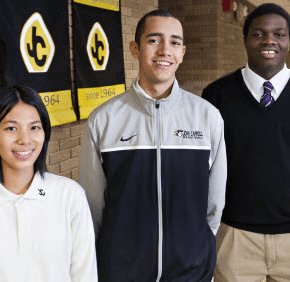 BEL AIR – Lionel Owona, a junior at The John Carroll School, aspires to play college basketball and study the inner workings of the brain.

A student at the Bel Air school since 2010, Owona said he wants to “live the dream.”

A native of Cameroon, Owona is one of 41 international students from eight countries at  John Carroll. Twenty-two are from China. Canada, Germany, Italy, Nigeria, South Korea and Spain also have sent students to the only Catholic high school in Harford County.

This year’s total is more than double the 17 foreign students who attended John Carroll in 2011-12.

John Carroll has had exchange students since the 1980s, said Richard O’Hara, the school’s president, but in 2011, it signed an agreement with a Boston-based educational consulting firm to recruit students from China and more than 20 other countries.

The school has “intentionally taken it to that next level,” said O’Hara, who added accepting foreign students aligns with the school’s mission “to serve responsibly in shaping a more just and compassionate global society. … There’s so much beauty to it.”

Admitting and integrating international students is “a huge undertaking,” said Ball, who added that in order to do so, John Carroll needed an English as a Second Language (ESL) instructor and host families, among other things.

International students must meet the same graduation requirements as their American peers, and are also expected to continue their education at a college or university. Many are involved in school clubs and sports.

“They’re such strong students, they’ll go to incredible lengths to do well in school,” said Ball, noting that foreign students typically come to John Carroll as freshman and sophomores.

Owona, the 17-year-old Catholic from Cameroon, plays varsity basketball and volleyball. He has set the bar high, as he wants to pursue medical school and become a neurosurgeon.

“I like the brain,” he said. “I want to learn how the brain works.”

Sandi Seiler, the school’s coordinator of International Student Programs and a Spanish teacher, also teaches an English course specifically for international students. An Iranian student she taught at John Carroll in the 1980s sparked her interest in teaching ESL.

“We don’t just see it as a valuable opportunity for these 41 students,” Seiler said, “but for all of our students and the entire community. It just brings things to life when you meet people from these different places.”

American students, she added, “mingle with people from all over the world because that’s real life. Just being open and learning from each other, that was really our primary goal.”

Junior Jinxian “Sunny” Lu, a native of China who has been at John Carroll since August, wants to attend an American college after she graduates in 2014.

“John Carroll is a very good school,” said Lu, who noted her favorite courses are chemistry and ceramics.

Sophomore Mateus Maccieri, a Catholic and native of Italy who has been at John Carroll since September, elected to come to the U.S. because “I want to have a new experience for me.”

He hopes to attend a U.S. college and get a job in America.

“Here I have more possibilities,” said Maccieri, a member of the school’s junior varsity basketball team who began studying English in middle school. “I’m improving a lot in my English.”

During an orchestra class, a German student helped Clingerman with her cello skills. At a recent choir rehearsal, as students sang about pine cones and holly berries, the German boy said he didn’t know what a pine cone looked like.

Clingerman promptly ran outside and grabbed one to show him.

“It’s interesting to see what we can share,” Clingerman said. “It’s cool we’re both learning from each other.”