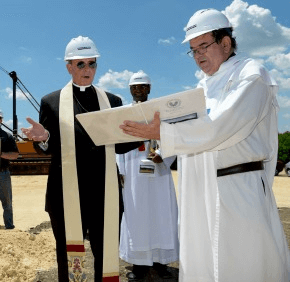 Parishioners, clergy and staff joined Archbishop William E. Lori for a June 18 groundbreaking on the first of three phases of a new parish complex at the site of the former Blob’s Park.

The new campus is on the southeast corner of the intersection of Baltimore-Washington Parkway and State Route 175. St. Lawrence Martyr’s 120-seat church, completed in 1868, is on the southwest corner of that cloverleaf, where the expansion of SR 175 will soon cut off access.

According to Michael Levesque, a parish historian, St. Lawrence Martyr considered expansion or building a larger church elsewhere as far back as 1966, on the occasion of its centennial.

The surrounding road construction is in response to exponential population growth in the region, highlighting the necessity of a new church in a different location.

Standing where the sanctuary will be located, Archbishop William E. Lori, center, Pastor Father Victor Scocco, right, and Trinitarian Father Binoy Akkalayil, are joined by members of the building committee of St. Lawrence Martyr as the church breaks ground on the new parish complex in Jessup June 18. The project is scheduled for completion in June 2017.  (Kevin J. Parks/CR Staff)
“The area has grown in population massively,” said Trinitarian Father Victor Scocco, pastor of St. Lawrence Martyr. “Three, four years ago, a study predicted there would be 1,000 new homes built in each of the next 10 years. Just driving around the neighborhood confirms that.”

Under a cloudless sky, Father Scocco, Archbishop Lori and others helped turn ground on the first of three phases of construction at the site.

Phase one, scheduled to be completed by June 2017, is a single-floor structure of approximately 19,000 square feet, being built by Hanover-based Conewago Enterprises Inc. It will include parish offices, classrooms and a 350-seat worship space that will be converted for other purposes after the completion of a 1,000-seat church, phase two.

“A lot of that depends on how quickly we take care of phase one,” Father Scocco said, when asked for a timetable on the new, permanent church.

The new worship space in phase one will serve as the location for weekend Masses and vigils, while the original church will host daily Masses. An education center would be the focus of the third phase.
Blob’s Park, a German-style beer garden and dance hall, had been in almost continuous operation from the end of Prohibition in 1933 until the economic downturn that began in 2008.
As previously reported in the Catholic Review, the Archdiocese of Baltimore purchased 29 acres of Blob’s Park for $6 million during the winter of 2012-13.
“The archdiocese acquired the land knowing that we needed to expand, because our rolls have been going up, and up, and up,” said Jeff Willson, chairman of the parish building committee. “We’re on a leaseback to the archdiocese. Until that’s paid off, we’ll worship in this facility, and once that’s paid off we’ll build the actual new church.”
The first phase of project is budgeted for $4.3 million. In addition to a loan from the archdiocese, the parish raised $840,000 through the Embracing Our Mission campaign, which helps maintain the archdiocese’s schools and parishes and expand them to fit the population of their region.
Archbishop Lori said the project fit with his role “to foster the life of the parish so that it is a lively community of faith, worship and service.”
The isolated construction site, surrounded by a wide expanse of trees, is reached by a winding gravel road at the end of Parkside Boulevard, where new homes are being built.
At the groundbreaking, canopy tents shielded attendees from the sun, and small bags of sand were distributed as mementos.
A short prayer service preceded the groundbreaking, which also included Trinitarian Father Binoy Akkalayil, associate pastor, and Deacon John Sedlevicius.
“Bless all those who have worked or contributed to provide this site on which a new parish complex will be built,” Archbishop Lori said. “Today may they rejoice in a work just begun. Soon may they celebrate the sacraments and worship You in this place.”

Christine Magnuson, a religious education teacher at the parish for 19 years and choir member, said she thought the new location was beautiful, and that she was looking forward to having new families at Masses.
“It’s a place that is calling me to be here,” said Bernadette Hickson, a new resident of Parkside Boulevard. “I am about to join St. Lawrence, and plan to go Sunday to the current parish.”
Patrick Kaczmar, another St. Lawrence Martyr parishioner, said he thought the new campus would benefit the expanding Catholic community in the area. Phase one’s features include a “cyber bar,” which Father Scocco said would be open to the entire community, not just members of St. Lawrence Martyr.
“Part of evangelization is to give our neighbors a place where they can come,” Father Scocco said. “For Catholics, and especially non-Catholics, it’s a way of saying, ‘Come, be with us’”

Cameron Rogers, a rising senior at Hood College in Frederick, is a summer intern for the Catholic Review.