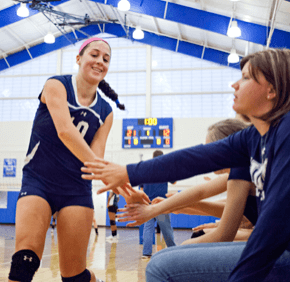 By Elizabeth Lowe
elowe@CatholicReview.org
Twitter: @ReviewLowe
TOWSON – Following his first season as Notre Dame Preparatory School’s volleyball coach five years ago, Jim Isphording moved the program from the Interscholastic Athletic Association of Maryland’s B Conference to the A Conference.
“I saw the potential,” Isphording said. “We wanted to compete (at a higher level).”
The Blazers went 13-0 in the regular season, the first time they had gone undefeated in the A Conference. While their quest for the conference title ended in a five-set semifinal playoff loss to Mount de Sales Academy Oct. 31, it was still a landmark season for top-seeded NDP.
“In any sport, that’s always difficult to do,” said Jamie Smith, NDP’s athletic director, referencing the team’s quest for perfection.
In the four years since the Blazers joined the A Conference, Isphording said his players have “progressively gotten better.”
Watch a video.
“It takes three to four years to turn a program around,” Isphording said.
Twelve of the 15 girls on NDP’s varsity this season play club volleyball. Senior Katie Willis credits the team captains with pushing them to the next level.
“The leadership on this team is amazing,” Willis said. “It’s all one big unit. It’s like a big, happy family.”
The leadership, enthusiasm, dedication and motivation was showcased at practice Oct. 23 when Emma Craig, a NDP senior and captain, took charge and started practice early. She credits the team’s coaches with the program’s rise.
“They hold us to a higher standard,” Craig said. “They expect us to be disciplined. They’re pushing us to be the best we can be.”
“When you trust your girls to do important things,” Isphording said, “and give them responsibilities and jobs, it makes them get the feeling that you believe in them a little more. They have more pride in the team and the program.”
Isphording, who didn’t pick up the sport until after college, has drawn some inspiration from his family. His uncle, Cary Lyon, is the coach at Dulaney High School in Baltimore County. The Lions also had a perfect regular season and were taking aim at a state 4A championship.
In addition to working full-time selling financial publications in Baltimore, Isphording helped start the Reisterstown-based Masters Volleyball Academy, where he coaches with Lyon.
While disappointed with NDP’s elimination in the A Conference playoffs, Isphording said, “It was, all in all, a very impressive year, as impressive a season as I could ever hope for.”
Also see:
Inside Sports: No bumps for Seton Keough Field Hockey
Inside Sports: Reif cup honors Curley coach, Calvert Hall parent
Inside Sports: John Carroll’s marching band plays, and practicies, hard
Inside Sports: Ellie Gonzalez a national-class runner at Catholic High
Inside Sports: Spalding’s broad-based program decades in the making
PrevNext