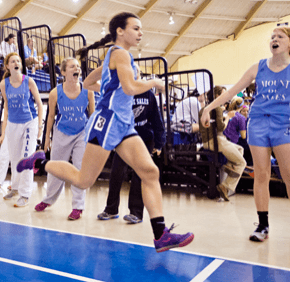 By Paul McMullen
pmcmullen@CatholicReview.org
ESSEX – Join the indoor track and field team, and improve your GPA.
That recruiting pitch doesn’t pack the same punch as “Join the Navy and see the world,” but there appears to be a positive correlation between improving classroom performance and times, heights and distances for the girls who stock the running programs at Mount de Sales Academy in Catonsville.
“Our (academic) top 10 usually has a good number of athletes, and it’s not unusual for them to come from track and field or cross country,” said Gene Williams, who retired earlier this year as the Sailors’ athletic director but remains as co-coach of their indoor and outdoor track and field teams.
Watch a video:
Exhibit A is Jessica Harris, who is not just nationally ranked in the 800 meters, but a National Merit Scholarship finalist.
At an Interscholastic Athletic Association of Maryland indoor meet at the Essex campus of the Community College of Baltimore County Dec. 7, Harris helped de Sales set a fieldhouse record for high schools in the 4×800 relay and won the 1,600 and the high jump with a personal best of 4 feet, 8 inches – in between reviewing notes on the Federalist Papers for an upcoming exam in American Government.
Clare Basil brought study materials for physics and Spanish. Katrina Hrabinski, a fellow junior, packed a book for her AP language class.
“We study more at the league meets,” Harris pointed out. “They’re on Friday nights, six hours long.”
The Dec. 7 meet included 13 schools and scores of open textbooks, as the Sailors weren’t the only ones to turn downtime between events into study hall on a day that saw them board a bus at 8 a.m., and return to campus at 3:15 p.m.
Basil, who was home-schooled before entering de Sales as a sophomore, notes that fun and games are involved, too.
“Last year a couple of senior girls told me, ‘you can only work so hard,’ so sometimes we’ll play a game, like Apples to Apples,” said Basil, who credits practice with helping her schoolwork. “I’m not restless when I get home from practice. That outlet helps me relax after a long school day and focus on my homework.”
Those workouts bolster not just the body, but the intellect and soul. The other half of a grandfatherly coaching staff is Steve Weber, an affiliate professor in the philosophy department at Loyola University Maryland and neighbor of Williams who is as likely to discuss Aristotle and St. Augustine with the Sailors as he is stride length and split times.
“We have a Catholic spin each year,” said Harris, of a practice begun under Nashville Dominican Sister Amelia Hueller, the former athletic department chaplain who prayed with teams. “Cross country (and all of 2013-14) was ‘agony’; we related that to Jesus’s walk (with the cross). … Last (year) was ‘wholehearted’; you have to run with your whole heart.”
Those themes endure.
Last spring in Philadelphia, at the Penn Relays, the world’s largest annual meet, Basil, Harris and Hrabinski teamed with senior Anastasia White to finish 24th in the 4×800, in a school record 9 minutes, 30.79 records. Now at the U.S. Naval Academy in Annapolis, White was one of the last three competing, and the final female, in the “plank” test for Plebes.
De Sales displayed similar fitness and toughness Dec. 14 at the Howard County Winterfest at the Prince George’s Sports and Learning Complex in Landover, where Hrabinskil (1200), Cecilia Craig (400), Caroline Arnold (800) and Harris (1600) set a meet record, 12:55.74, in the distance medley relay. That was on a fast 200-meter track, where spikes are allowed, another reminder of the resilience honed in the Sailors.
While most of the competition has a 400-meter track on campus, it wasn’t until 2012 that de Sales could even set up cones for a 200 oval, and then on its new artificial turf field. While its field event people get occasional access to the Catonsville campus of CCBC or Mount St. Joseph High School, because of the snow that hit the region Dec. 9 and 10, most of the Sailors’ track workouts that week were conducted on a parking lot.
“It might be called indoor track and field,” Williams said, “but unless it’s really terrible, all of our workouts are outside.
Also see:
Inside Sports: No 4-0 for select Calvert Hall seniors
Inside Sports: Loyola’s water polo team flows into swim season
Inside Sports: NDP proves its A conference caliber
Inside Sports: No bumps for Seton Keough Field Hockey
Inside Sports: Reif cup honors Curley coach, Calvert Hall parent
Inside Sports: John Carroll’s marching band plays, and practicies, hard
Inside Sports: Ellie Gonzalez a national-class runner at Catholic High
Inside Sports: Spalding’s broad-based program decades in the making
PrevNext