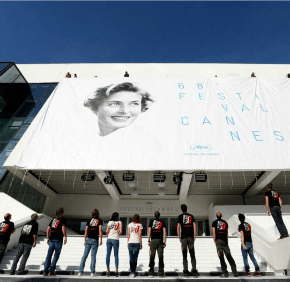 The occasion of the Swedish-born actress’ centennial – she was born August 29, 1915 – has spurred lavish retrospectives of her films worldwide, including events at New York’s Museum of Modern Art in and the American Film Institute in Silver Spring, Maryland.

The anniversary also is being marked by a pair of exhibitions at the Swedish Embassy in Washington, a new documentary, “Ingrid Bergman: In Her Own Words” (Mantaray), and a commemorative postage stamp issued jointly by the U. S. Postal Service and Sweden’s PostNord Sverige.

It’s a worldwide observance as a result of her multifaceted canon. First, there are the early films made in her homeland between 1935 and 1939 (she had an uncredited role as early as 1932), then her work in Hollywood over the following decade – after which came European titles, mostly directed by Roberto Rossellini, from 1949 to 1954.

Bergman returned to Hollywood fare in 1956 with “Anastasia” and thereafter performed not only on the big screen, but on Broadway and for television as well, ending with a TV portrayal of Israeli Prime Minister Golda Meir in “A Woman Called Golda,” completed shortly before Bergman’s death on her 67th birthday in 1982.

Bergman’s fame rests largely on the output of her first Hollywood years, an extraordinary period that gave us “Casablanca” (1942), “Gaslight” (1944) and “Notorious” (1946) – as well as two Catholic-themed pictures, both of which are included in the aforementioned retrospectives.

In 1948’s “Joan of Arc,” Bergman plays the 15th-century teen mystic whose victorious leadership of the French army in the Hundred Years’ War against England was inspired by the voices of saints.

“Bells,” the sequel to Leo McCarey’s “Going My Way” (1944), was an immense success, and later became a Christmastime stalwart on TV. “Joan,” by contrast – an independent, expensive and clunky Technicolor production directed by Victor Fleming – lost money on its original release.

Fleming’s ill-received epic, which would turn out to be Bergman’s last Hollywood venture for two decades, was re-edited into a somewhat confusing narrated version some years later. But its critical reputation has risen a bit since a 1998 restoration.

Both productions had clerical advisers. “Bells” used Monsignor John J. Devlin, the pastor of St. Victor Parish in West Hollywood and the Los Angeles-area representative of the National Legion of Decency.

For “Joan,” a distinguished French scholar, Jesuit Father Paul Doncoeur, was chosen. The editor of the journal “Etudes,” Father Doncoeur was considered the world’s leading authority on the Maid of Orleans.

But that aspect of Father Doncoeur’s long and varied resume – he was also an officer of the Legion of Honor, a pioneer of French scouting and, it seems, a backer of the collaborationist Vichy regime during World War II – wasn’t the only reason he was selected.

Fleming and producer Walter Wanger had taken a dislike to Monsignor Devlin. Yet they needed the imprimatur of an unimpeachable church insider if their presentation of potentially sensitive subject matter was to pass muster with the Legion.

Fatrher Doncoeur’s scholarship had reaffirmed the church’s own long-ago finding that French Bishop Pierre Cauchon (1371-1442), an English ally, had rigged Joan’s 1431 trial for heresy. But the Hollywood Production Code, which the Legion helped enforce, forbade the negative portrayal of clergymen – Catholic or Protestant, contemporary or historical.

So a conundrum had to be solved. As a result, screenwriters Maxwell Anderson and Andrew Solt’s script left out large swaths of the film’s primary source material, Anderson’s 1946 play “Joan of Lorraine,” in which Bergman had starred.

Among the excised lines was Cauchon’s preemptory declaration that Joan “has freely admitted enough heretical beliefs and actions to burn all the virgins in Europe. In my mind she is condemned and the trial is over.”

In the end, the screenplay hedges on the medieval prosecutor’s actions, and labels him “Count-Bishop” Cauchon to make it clear that he had a political as well as a religious role to consider. Yet, as sneeringly portrayed by the hefty Francis L. Sullivan, Cauchon remains the heavy of the piece in more senses than one.

We know what Father Doncoeur thought of Monsignor Devlin – and Bergman – because he wrote a remarkable series of letters during his Hollywood experience. They were eventually published in France in 1979, 18 years after his death.

Already in his mid-60s, and having been wounded in combat as a military chaplain in World War I, Father Doncoeur was not easily impressed or intimidated by anyone in Hollywood. He called Monsignor Devlin “a man very sure of himself, and unpleasant in his self-importance.” He also quoted Monsignor Devlin as telling him, “Father, what I want is not historical accuracy;it is the service of the Catholic Church.”

“I have been told not to worry about this man,” Father Doncoeur added.

Bergman, however, charmed the French priest instantly: “A very simple woman,” he wrote. “She wants to live the life of Joan as intensely as possible. I learned that she is a devout Lutheran who reads the Bible daily.”

He eventually quizzed her at length on her religious knowledge: “As a Swede, she had never even heard anyone speak of Catholicism; she was raised … without any contact with religion. It was in America that she discovered peoples, races, religions.”

Then, this observation: “She respects Catholicism, which she likes but is not familiar with at all.” That might be interpreted as an uppercut to Sister Mary Benedict. But more likely Bergman was merely trying to remind Father Doncoeur that actors are not to be confused with the figures they play.

“What attracts her about Joan is her love for France, for her people, for whom she sacrifices herself, her simplicity and her honesty. … She has a very simple nature and I believe that she finds herself in Joan without having to become a character.”

After “Joan of Arc,” Bergman didn’t make another film in Hollywood until “Cactus Flower” in 1969. Anxious to achieve a more realistic acting style, she went to Italy to make “Stromboli” with Rossellini.

They fell in love while both were still married, she to neurosurgeon Petter Lindstrom. There was a brief but noisy scandal when Bergman became pregnant – and gave birth to Rossellini’s son – before divorcing Lindstrom.

Although immense sympathy for Bergman was expressed in the news media, the opposite sentiment was so widespread that it even reached the floor of the U.S. Senate – a fact for which Bergman got an official apology in 1972.

In her posthumously published memoir, “Ingrid Bergman: My Story,” the star wrote that she’d wanted to play Joan since childhood. That part of the story, her daughter Pia Lindstrom says, is absolutely true.

“My mother had a fixation with Joan of Arc. She played her in the theatre, in an oratorio (‘Joan of Arc at the Stake’ by Arthur Honegger) and a film. There was something in the idea of Joan – called to greatness by inner voices – that my mother responded to.”

“So much devotion that came to so little – for both the film and the filmmakers. It is poignant,” Lindstrom concludes.

Nuns, both real-life and fictional, get the cinematic treatment