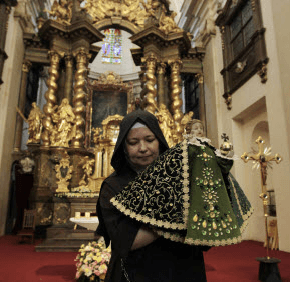 ELLICOTT CITY – Four words were on the index card: “A child to love.”

Left in a box at the foot of a statue of the Infant Jesus of Prague at St. Paul, Ellicott City, the card was the prayer of a couple hoping to conceive and seeking the efficacy of a centuries-old devotion.

The prayer prompted Dr. Michael Cataldo, a St. Paul parishioner and founder of the Society of the Infant Jesus, to organize an annual Mass at St. Paul for couples who desire to have a child.

About 20 people attended the Friday evening Mass, which was followed by a catered Italian dinner at the adjacent parish hall.

“Popular devotions really bring to a human level divine mystery,” Bishop Rozanski said in his homily. “The Infant of Prague is a devotion that helps us to realize that Jesus came to us vulnerable as a child, and yet, still clothed with kingship.”

He continued: “It’s appropriate that we gather this evening with this Infant of Prague devotion, asking the Infant of Prague to be with our married couples here who seek to bring new life into the world, who seek to participate in God’s creation, and who find in this devotion the reality of God with us.”

The original Infant of Prague statue was the wedding gift of a Spanish princess, who brought it to Bohemia in the 16th century. Her daughter later entrusted it to Carmelite priests, and the statue is now housed at the Church of Our Lady Victorious in Prague, Czech Republic.

The 19-inch-tall, wax-coated wood statue of the Christ Child is adorned with a crown and royal garments, his right hand raised in blessing and his left holding a cross-bearing orb symbolizing God’s dominion over the world.

Over the centuries, miracles have been associated with devotion to Christ through veneration of the statue, which attracts pilgrims from around the world. Among the intentions frequently brought to the Infant of Prague is for conception of child, Caltado said.

Cataldo founded the Society of the Infant Jesus a decade ago in Baltimore after visiting the statue in Prague. The ministry collects prayer requests from across North America—including those placed before the statue in Ellicott City, where devotion is growing—to send to the Church of Our Lady Victorious.

He gave the couples small replicas of the Infant of Prague and a novena booklet. Organizers believe that St. Paul’s Mass is the only one offered for this intention in the Archdiocese of Baltimore.

Father Buening has long had a devotion to the Infant of Prague. Last year’s Mass “really implanted in my heart how important this is,” he said. “I was so struck with how beautiful and powerful the Mass was to so many people.”

Catholic couples who are unable to conceive often face the challenge with private prayer, and are not the focus of typical ministries, he said after the Mass. It is helpful for them to meet others in similar circumstances, he added.

A professor of behavioral psychology at The Johns Hopkins University School of Medicine and the director of the Kennedy Krieger Institute, Caltado said that he has learned that there are many couples in the archdiocese who are trying to have a child but are unable to become pregnant, and he hopes the Masses can be a way for the church to provide spiritual and emotional support.

Among the couples who attended were 30-year-olds from Glen Burnie who have been married five years. They hope to become parents but have struggled to overcome infertility.

The couple – who requested that the Catholic Review not use their names – sees a doctor in Harrisburg, Pa., who is trained in NaPro Technology, an approach to reproductive health designed by the Pope Paul VI Institute for the Study for Human Reproduction and the National Center for Women’s Health in Omaha, Neb.

The doctor discovered that the wife has endometriosis, and she underwent surgery to remove blockage from her fallopian tubes. She conceived last year, but lost the child in miscarriage.

“(The miscarriage) was really hard, but it was a relief to know (pregnancy) was possible,” she said.

Cataldo hopes the annual Mass’ attendance will grow. He is also organizing an ongoing group for couples hoping to conceive and for those who had children after infertility. He hopes the group can provide friendship, support and education on church-approved methods of achieving pregnancy.

To send petitions or receive more information about the Infant of Prague, write to: Society of the Infant Jesus, 8630M Guilford Road, Suite 401, Columbia, MD 21046.