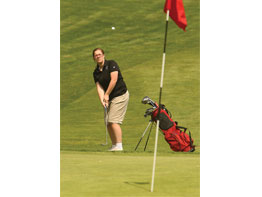 Institute of Notre Dame and The Seton Keough High School placed one, two in the IAAM B Conference tournament May 5-6 at Longview Golf Course, Cockeysville.

It was difficult for IND Head Coach Gerard Vetter to decide which four golfers to enter into the tournament.

The Baltimore school’s team went 8-0 in the B Conference and has been steadily improving their game over the last three years.

The team shot a 94 on both days to pace the conference and come away with the title honors. Melvin, who placed first in the conference round, scored 50 her first day and shaved four strokes off of that on the second day to shore up the win over The Seton Keough High School, Baltimore. Webster posted a 52-52 for a two-day total of 104.

“As a three-year program, this is the highest we’ve ever finished,” said Kapusinski.

Seniors Jenny Sinnott and Ericka Micciche, who made All Conference, made the difference in the second day of the tourney, reaching back for an eight-stroke swing to move into second place over Mount de Sales Academy, Catonsville.

Kapusinski described Sinnott as an all-around good golfer with a solid putting game, while Micciche can drive the ball off the tee close to 300 yards on average.

Seton Keough sophomore Morgan Layne missed All Conference by one stroke, as only the top six finishers received the honors. Morgan, a left-handed player, brings a tremendous amount of skill to the game. She will represent Seton Keough in the Maryland qualifying round of the McDonald All-American tournament.

Kapusinski was so proud of his team for not quitting and not getting down on themselves.

“This was a great learning experience for our girls. It was a perfect example of why you should never count yourself out,” he said.