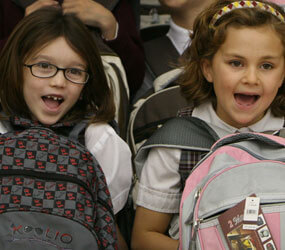 GAMBRILLS – As choirs of youngsters sang “Jingle Bells,” “Feliz Navidad” and other Christmas favorites Dec. 15, hundreds of students of School of the Incarnation went about the work of making this Christmas special for nearly 1,000 people who are homeless.

One by one, children of all ages picked out backpacks during a morning gathering at the school – stuffing 957 of them with brand-new gloves, thermal underwear, socks and other clothing items. At the bottom of each care package, they inserted homemade cards with messages including, “Merry Christmas!” and “Happy New Year!”

Children in grades K to 8 raised more than $24,400 to purchase the backpacks and gift items, which will be donated to a nonprofit group called “Giving Back” and delivered to 26 shelters in Baltimore, Anne Arundel County and Washington, D.C. Christmas Eve morning.

The night before Christmas, some of the gifts will be distributed directly on the streets of Baltimore and at an emergency overnight shelter. Many of the children will accompany their parents in delivering the items personally throughout the day.

“It makes me happy,” said 6-year-old Matthew Kuhns, a first-grader who handed out some of the backpacks with his family last year. “They need clothes on Christmas Eve so they can be warm and have a nice Christmas. We’re helping the poor.”

Matthew made a personal donation of toy Legos – joining many other students and their families in making additional donations of toys, furniture and other household items for homeless-outreach organizations.

Steve Anstett, executive director of Giving Back, called the Incarnation backpack donations “amazing.” The school is the most supportive of any that contributes to Giving Back, he said.

“In fact,” he said, “in some years, it’s been more here than in all the others combined.”

Anstett called the contributions “life-saving.” It’s meaningful that some of the children will meet the homeless people they are helping, he said.

“The homeless are so shunned by today’s society,” Anstett said. “On Christmas Eve – in honor of our savior – the families here and other volunteers come out and they put their hands on a homeless person’s shoulder, look them in the eye and say, ‘Merry Christmas!’”

Anstett said he was touched by the simple message one youngster wrote on a Christmas card that will be given to someone in need.

“We raised almost $900,” Bridget said. “It helps me realize that we’re all God’s children and God wants all of us to be equal.”

Emma and Bridget were surprised by how much they raised.

“It makes me closer to God,” Emma said, “because I feel better in my heart about doing this. It makes me a better person.”

“I think it encourages them to continue charitable works,” Shipley said. “It’s an opportunity for them – even the smallest – to be able to put their faith into action.”