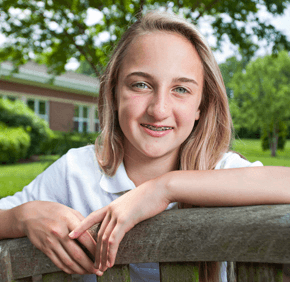 By Elizabeth Lowe
elowe@CatholicReview.org
GAMBRILLS – Like other 12-year-olds, Pamela Grace Campbell is active.
She plays softball, basketball and enjoys horseback riding. These activities are not only a means of exercise – they keep Pamela Grace’s mind occupied.
Pamela Grace, a seventh-grader at School of the Incarnation and a parishioner of St. Elizabeth Ann Seton in Crofton, was diagnosed with Crohn’s disease at age 10. She is the 2013 honored hero for the Crohn’s and Colitis Foundation of America’s (CCFA) Baltimore Take Steps Walk June 8 at Baltimore’s Inner Harbor.
“I like telling people my story,” said Pamela Grace, who will give a speech before the two-mile walk. “I tell them about the pain I felt before I was diagnosed, after the diagnosis and up to now. I have this responsibility to share my story.”
According to the CCFA, Crohn’s disease is a chronic inflammatory condition of the gastrointestinal tract that affects approximately 700,000 Americans and ulcerative colitis is a chronic disease of the large intestine. Both are inflammatory bowel diseases.
Since her diagnosis, Pamela Grace has endured three hospital stays, which averaged about 26 days.
Pamela Grace and her team – Team Pamela Grace – raised $2,500 for the 2012 CCFA walk. This year, they’re working to raise $10,000.
“It’s been important for us to raise funds and use her name because it helps bring awareness,” said Teri Campbell, Pamela Grace’s mother. “It will be great for her to know her hard work is being recognized.”
She continued, “Everyone calls her (Pamela Grace) a fighter and says ‘she’s so brave.’ She has a fighting spirit, that’s for sure.”
Erin Brooks, Take Steps Walk manager for CCFA’s Maryland/Southern Delaware chapter, said her organization was compelled by Pamela’s story and everything she has been through.
“Here’s this little girl who was so, so sick and she bounced back,” Brooks said. “We were inspired by her.”
Lisa Shipley, principal of Incarnation, said Pamela Grace “fought” to be in school.
“She would stay as long as she could,” Shipley said. “As a Catholic school, it’s about using your gifts and talents. Pamela is a great example. She is able to inspire others.”
Pamela Grace, a mature and soft-spoken tween, has found comfort in her faith and emphatically noted she relies on it “a lot.” During her hospital stays, she was visited by a chaplain and received the Eucharist.
“If I’m having a really bad day, I’ll stop and pray,” said Pamela Grace, who is in remission. She takes medication and once every six weeks receives treatment at the hospital. There is no cure for the disease.
This summer Pamela Grace will head to West Virginia for a weeklong residential camp for youths with Crohn’s and colitis.
“I’m so excited,” she said. “These people know what I’m feeling.”
If you go:
What: Crohn’s and Colitis Foundation of America’s Baltimore Take Steps Walk
When: June 8, 6 p.m.
Where: Baltimore Inner Harbor’s West Shore Park
Cost: Free, participants asked to fundraise
For information or to register: cctakesteps.org/baltimore
Copyright (c) May 27, 2013 CatholicReview.org
PrevNext