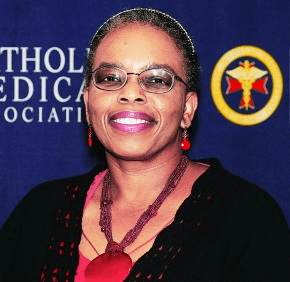 By Dr. Marie-Alberte Boursiquot
Editor’s Note: The U.S. House of Representatives passed the Conscience Protection Act of 2016 (S. 304) July 13 in a 245-182 vote. Dr. Marie Alberte-Boursiquot, president-elect of the Catholic Medical Association and a parishioner of the Basilica of the National Shrine of the Assumption of the Blessed Virgin Mary in Baltimore, offered the following testimony at the U.S. Capitol on the topic July 8.
I am delighted and honored to be invited to address you ladies and gentlemen today on the Conscience Protection Act (CPA).
It’s providential that we are gathered today to discuss a threat to our religious liberties following the July 4th holiday. I need not remind any of you that our First Amendment states: “Congress shall make no law respecting an establishment of religion or prohibiting the free exercise thereof …”
I am here today to help you appreciate the importance of upholding conscience rights and religious liberty in all aspects of life and most especially in the delivery of health care.
As an organization, the CMA was accepted as a party to the case of the ACLU (American Civil Liberties Union) vs. Trinity Health Care where the ACLU would force hospitals to perform abortions and threaten the rights of medical professionals and the choices of pro-life patients. This case would furthermore violate federal conscience laws.
The Conscience Protection Act of 2016 is necessary in that it will protect health care professionals from being forced to pay for or participate in abortions and allow victims of discrimination a “right of action” to defend their rights in court.
We cannot allow our government to force hospitals, physicians, nurses, and other health care professionals to stop offering much needed health care because they cannot in good conscience participate in destroying developing life.
This intrusion of the government prohibits the free exercise of our faith as Catholics. Catholic Medical students are particularly vulnerable in that they may be forced to participate in abortions and learn how to perform them. This would not only violate their conscience, as Catholics, but force them to violate the Hippocratic Oath.
This oath, as you know, was developed in the 5th-3rd century, B.C, and requires a new physician to swear to uphold specific ethical standards in the practice of medicine. A modernized version of the original Greek version is often used today. But originally one swore to the following:
All human life is a gift from God. Pregnancy is not an ailment but a sign of health. Abortion terminates that gift of life and the woman ultimately suffers physically, spiritually, and emotionally. Physicians and Catholic hospitals should not be coerced to violate their consciences in performing this harmful act nor allow it to be performed in a Catholic setting.