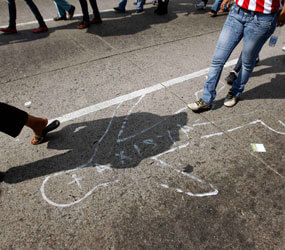 VATICAN CITY – Mexico’s high level of violence is of deep concern and will surely be addressed by Pope Benedict XVI during his visit to the country next year, said a Vatican official.

The Vatican missionary news agency Fides reported that during a news conference in Merida, Mexico, Nov. 22, Archbishop Christophe Pierre, the apostolic nuncio to Mexico, said the pope’s visit will provide hope for the country and bring a message of “peace and encouragement” to people suffering from violence.

“The pope will bring us courage for the difficult times, in order to have the strength to fight against violence and help us unite for peace,” the archbishop said. He said violence in Mexico was a matter of concern for the church, government leaders and the entire country.

The Vatican recently announced that a papal trip to Mexico and Cuba for the spring of 2012 was in the advanced planning stages.

Mexico has experienced a dramatic increase in crime-related violence in recent years. From 2007 to 2010, 34,550 killings were linked to organized crime compared to about 8,900 such killings from 2000 to 2006, according to government data.

In 2010 alone, close to 15,000 organized crime killings occurred, making it the worst year on record for such violence.