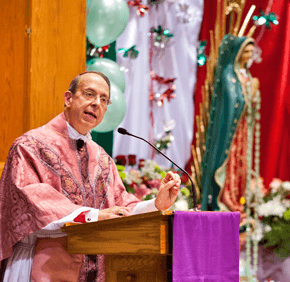 In his homily, he connected the message of hope and freedom inherent in the 16th century Marian apparitions to Gaudete Sunday, which instructs Christians to rejoice.

“Mary leads us to Christ. Mary really is the one who brought about the first Advent, and now she brought about the Advent of Christ to America, because after she appeared at Tepeyac (hill), the evangelization of America took off,” he said after the Mass. “Our Lady of Guadalupe really does bring together all of America, and she really symbolizes the new evangelization.”

About 600 people attended the evening Mass, a liturgy of Holy Trinity held in the gym of nearby Monsignor Slade Catholic School.

The Holy Trinity Mass included a play retelling the story of the Blessed Virgin Mary’s appearances in 1531 to St. Juan Diego, an Aztec peasant and Catholic convert, which led to the miraculous image of Mary appearing on his tilma, or cloak. She became known as Our Lady of Guadalupe, a title she gave in a related appearance to Juan Diego’s infirm uncle, who was miraculously healed, according to accounts of the events.

The image is on display today in the Basilica of Guadalupe in Mexico City, near the site she appeared to Juan Diego. Her apparitions led to the conversion of an estimated eight million Aztecs.

Cesar Espinosa, 31, who played St. Juan Diego, said “it’s important to show the children the story” with the annual reenactment.

Nancy Reyes, 17, who played Mary, said the play reminds her “how miracles exist, and how the Virgin Mary is always with you.”

Following the play, a dozen children and adults wearing feathered headdresses and sequined garments with images of Our Lady of Guadalupe danced before the sanctuary, presenting symbols of fire and smoke before a statue of Mary.

The ritual has roots in Aztec deity worship, but has evolved into a customary means of honoring Mary during Our Lady of Guadalupe’s feast, said Emma Peralta, 31, who coordinated the dancing. She hoped it expressed to Archbishop Lori the deep devotion Latino Catholics have for the Virgin of Guadalupe, she said.

The Mass also included a mariachi band and procession of large flags representing the United States and Central and South American countries. Our Lady of Guadalupe has long been the official patroness of Mexico and other Latin American countries, but in 1960, Pope John XIII named her “Mother of the Americas.”

After the Mass, parishioners feasted on tamales and other traditional Mexican foods while enjoying Aztec dancing and mariachi music.