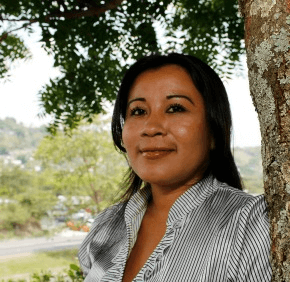 By Edgardo Ayala
Catholic News Service
SAN SALVADOR, El Salvador – Guadalupe Vasquez is one of many women who have experienced the consequences of strong anti-abortion laws in El Salvador.
In this Central American country of 6.3 million inhabitants, a poor woman who has a miscarriage and goes to a hospital seeking medical help often ends up in jail.
Vasquez, a 25-year-old from Paraiso de Osorio, about 30 miles east of San Salvador, was sentenced to 30 years in prison in January 2008 after being accused of aggravated homicide, after she miscarried the previous October.
“I was recovering in the hospital when the police came and told me I was arrested and handcuffed me to the bed,” she told Catholic News Service. She then was taken directly to jail to await an initial hearing.
“We were 70 inmates cramped in a very small cell and slept on the cold floor,” she recalled.
She said she was bullied by other inmates because they said that she killed her baby.
“They shout at me: (Expletive), rot in jail!” she said.
In February, after seven years in prison, in a historic vote, Vasquez was granted a pardon by the Salvadoran Congress, due to the lack of adequate defense and the lack of due process during the trial.
The forensic reports shown during the trial did not prove that she had killed the baby, and the cause of death was “undetermined,” according to a February press release from Amnesty International.
“I could not believe that I was free. … Once outside, I walked and didn’t feel my feet, I felt as if I was (floating) in the air,” she recalled.
“They stole seven years of my life. During that time, I could not work to help my mother,” said Vasquez. She said she had to quit school when she was 12, in order to start working as a maid to help her family, but she was raped and became pregnant.
In 1998, the Salvadoran Congress amended the law to make all forms of abortion illegal, including cases of congenital malformations of the fetus or when the life of women and girls are at risk or they have been victims of rape. El Salvador is one of six nations – along with Chile, Haiti, Nicaragua, Honduras and Suriname – that criminalize abortion on all grounds.
Vasquez was one of 17 women imprisoned in recent years on charges of abortion or homicide. Those cases were widely known because of a global campaign carried out by women and human rights organizations seeking a relaxation in the law and their release from jail.
In April, the campaign was reactivated when Amnesty International and the Agrupacion Ciudadana por la Despenalizacion del Aborto (Citizens Group for the Decriminalization of Abortion) presented a petition, supported by 300,000 signatures, to Salvadoran President Salvador Sanchez Ceren to promote changes in the legislation.
The abortion issue generates heated discussions in this conservative country, where the influence of religious groups, Catholics and Protestants, was crucial to toughen the legislation in 1998.
But such laws only refer to abortion and do not say anything about miscarriages as a result of obstetric complications.
Father Jose Antonio Ventura, a parish priest with a degree in bioethics, believes that distinction needs to be made, thus preventing more women from being convicted for a crime they have not committed. He suggests the church set up a bioethics committee to promote a change in the law to establish the difference between an abortion and miscarriage.
Father Ventura is pastor of Maria Auxiliadora parish in Ilopango, a crime-ridden town east of San Salvador, where he hears confessions of women who have lost their babies or have had an abortion.
“Only deliberate acts can be tried … but a miscarriage is an act of nature, not something the woman has wanted,” he told CNS.
He added that the church cannot be in favor of convicting a woman for a crime she has not committed.
Among the 17 women imprisoned in recent years was Mirna Ramirez, 47, sentenced in 2004 to 12 years in prison for having an abortion, although she insisted she never tried to terminate her pregnancy.
Her case was also submitted to the Congress to seek a pardon, but it was refused. She finished her sentenced in 2014.
“It was an injustice; I did not do it on purpose, it was something that happened to me, and I was locked up for 12 years without seeing my loved ones,” Ramirez told CNS.
But there are more women still imprisoned. An investigation carried out by the Agrupacion Ciudadana found that 129 women were prosecuted on charges of abortion or murder between 2000 and 2011. Of those, 49 were found guilty.
It is not known how many finished their sentences and were released, because most of those cases were tried more than 10 years ago and could not be tracked down by the Organizacion Ciudadana’s lawyers.
Karina Recinos, one of the lawyers of Agrupacion Ciudadana por la Despenalizacion del Aborto, said most women who have been sent, handcuffed, from a hospital to jail for pregnancy-related complications have been denounced to police by the same doctors and nurses who treated them. She said although medical reports are inconclusive as to whether there has been an abortion, they denounce women anyway, to avoid being prosecuted.

Also see:
Pope says parents must not exclude themselves from children’s lives