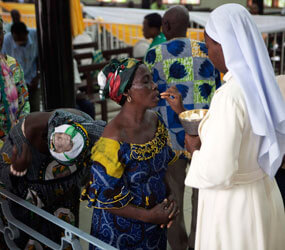 VATICAN CITY – Pope Benedict XVI is making his second trip as pope to Africa, spending three days in Benin and presenting an important document on the future of the church on the continent.

Benin is a small West African nation with little international influence. But its 150-year history of Christianity, its multi-ethnic and multifaith identity, and its struggles for social justice make the country an ideal platform for the pope’s message.

The Nov. 18-20 trip features meetings with government leaders, a speech to non-Christian leaders and an encounter with children at a local parish. The 84-year-old pope will deliver 10 major talks at 16 events in Benin, spending most of his time in Cotonou, but also visiting the coastal city of Ouidah.

The centerpiece of the visit will be the pope’s consignment of his apostolic exhortation to the bishops of Africa during a Mass in Cotonou’s Friendship Stadium Nov. 20.

The 2009 special Synod of Bishops for Africa, which brought more than 200 bishops to Rome, focused on “the church in Africa in service to reconciliation, justice and peace.”

The assembly ended with calls for spiritual conversion and social reforms, appealing for a fairer global order and telling corrupt Catholic politicians in Africa to “repent or resign” in the name of the common good.

The synod’s conclusions were summarized in 57 final propositions that were presented to the pope for his consideration.

Pope Benedict has already indicated some of his priorities for the church in Africa. Closing the 2009 synod, he said that if the church wants to change hearts and minds on the continent, it must itself be a model of unity with “no divisions based on ethnic, language or cultural groups.”

Benin’s more than 40 ethnic groups have lived in general harmony, but the country is not immune from occasional tension. Neither is the Catholic Church. Last spring, there was public opposition by some indigenous leaders when the pope named Archbishop Augustine Obiora Akubeze, a member of the Igbo ethnic group, to head the archdiocese of Benin City.

Church officials say Benin enjoys a climate of interreligious calm and cooperation. The country has escaped the violence that has frequently erupted between Christians and Muslims in neighboring Nigeria. Benin’s population of nearly 9 million people is 42 percent Christian and 24 percent Muslim, with the rest divided between followers of voodoo practices and native religions.

One point Pope Benedict has consistently underlined is the need for African Christians to reject traditional customs that go against the Gospel. Speaking to bishops from Angola in October, he said Christians were called to renounce the persistent practice of shunning or even killing people accused of being witches.

In Benin, where polygamy is officially illegal but endures in practice, the pope is expected to underline the Christian understanding of marriage as a primary objective for the church.

The Catholic population in Africa doubled under Blessed John Paul II. In general, Pope Benedict has sought to consolidate the gains made under his predecessor, emphasizing religious education as a fundamental element of firm faith.

Like many African countries, Benin has enjoyed a boom in vocations to the priesthood and religious life. Here, too, the pope has expressed gratitude for this trend, but also has pointed to the need for careful selection of candidates and better formation programs.

Social justice issues will undoubtedly figure prominently in the pope’s post-synodal document and in his speeches in Benin. During the 2009 synod, the pope spoke about the tremendous suffering caused by poverty, disease, forced migration and civil strife, and said the church must combine evangelization and the promotion of social justice.

He also said the church needs to help steer globalization toward a more inclusive economic model that benefits all people and not only the wealthy. In Benin, one of Africa’s poorest countries, it will be interesting to see if the pope refers to the recent hard-hitting document issued by the Pontifical Council for Justice and Peace, which called for creation of a world political authority with powers to regulate financial markets in favor of the common good.

The African synod called for “saintly politicians who will clean the continent of corruption.” Corruption is common in Benin, and the pope will no doubt raise the issue, probably by encouraging the work of the recently formed Network of National Anti-Corruption Institutions in West Africa, which is headed by Benin’s anti-corruption chief.

The pope’s visit will include a visit to the tomb of the late Cardinal Bernardin Gantin, who died in 2008. The Benin cardinal, much-beloved in his native country, worked closely with the future pope – then-Cardinal Joseph Ratzinger – during his more than 25 years as an official of the Roman Curia.