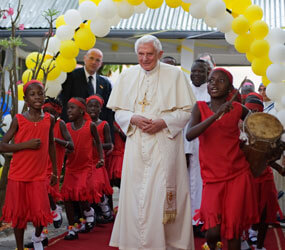 COTONOU, Benin – On a three-day visit to Benin, Pope Benedict XVI urged African Catholics to witness the hope of the Gospel in their daily lives and make the church a model of reconciliation for the entire continent.

In a particular way, the church must be “attentive to the cry of the poor, the weak, the outcast,” the pope said at a Mass Nov. 20 for more than 50,000 people who filled a stadium in Cotonou.

“I would like to greet with affection all those persons who are suffering, those who are sick, those affected by AIDS or by other illnesses, to all those forgotten by society. Have courage! The pope is close to you in his thoughts and prayers,” he said.

The 84-year-old pontiff delivered his homily in French, English and Portuguese, adding a few words in Fon, the local indigenous language. He occasionally wiped his brow as temperatures rose during the morning liturgy.

The pope stressed the urgency of evangelizing and said the church must make a special effort to reach those “whose faith is weak” and who think selfish satisfaction and easy gain is the goal of human life.

“The church in Benin has received much from her missionaries; she must in turn carry this message of hope to people who do not know or who no longer know the Lord Jesus,” he said.

The pope’s message was aimed beyond the borders of Benin, a small West African country with a population of nearly 3 million Catholics out of a total population of nearly 9 million. He came to Africa to unveil a document, “Africae Munus” (“The Commitment of Africa”), that outlined pastoral strategies and urged Catholics to become “apostles of reconciliation, justice and peace” across the troubled continent.

At every one of his public events, Africans – including many pilgrims who came from neighboring countries – gave the pontiff a lively welcome, blending song, dance and prayer in a spirit of religious celebration. The smiling pope clearly appreciated the reception.

One of the most animated encounters saw the pope surrounded by several hundred schoolchildren, who accompanied him in a rhythmic procession and cheered him inside a parish church. In a talk, the pope told the children to ask their parents to pray with them.

“Sometimes you may even have to push them a little. But do not hesitate to do so. God is that important!” he said.

Later he pulled a rosary from his pocket and asked the young people to learn how to pray it. Each child was given a rosary at the end before they left.

On Nov. 19, the pope traveled to the coastal city of Ouidah, a former slave trading post on the Atlantic, to sign his follow-up document to the 2009 Synod of Bishops for Africa. The 138-page text said the church should lead the way in promoting respect for human dignity and life at every stage, fighting against economic imbalance and environmental degradation, providing health care to those with AIDS and other diseases, educating the young and reconciling human hearts in places of ethnic tension.

In a brief talk before the signing, the pope said that in the face of Africa’s problems, “a church reconciled within herself and among all her members can become a prophetic sign of reconciliation in society” and help guide the struggle against “every form of slavery” in the modern world.

Ouidah is known as a center of voodoo practices in West Africa, and in a meeting with Catholic faithful there the pope underlined the need to reject customs incompatible with Christianity. Understood correctly, he said, the Christian faith “liberates from occultism and vanquishes evil spirits, for it is moved by the power of the Holy Trinity itself.”

He also encouraged lay Catholics to defend the institution of the family “built according to the design of God” and the Christian understanding of marriage. Parents should transform family life through the power of prayer and by transmitting values to their children by their own example, he said.

In a Ouidah church, Pope Benedict prayed at the tomb of Cardinal Bernardin Gantin, who worked for many years with the future pope in the Roman Curia. The pope said that over the years, the two had met many times, engaged in deep discussions and prayed together.

Addressing diplomats, civil authorities and religious representatives Nov. 19 in Cotonou, the pope said Africa’s challenges reflect wider issues common to all humanity, including scandals and injustice, corruption and greed, and “too much violence which leads to misery and death.”

He urged world leaders to put the common good at the center of their policies.

“From this place, I launch an appeal to all political and economic leaders of African countries and the rest of the world. Do not deprive your peoples of hope! Do not cut them off from their future by mutilating their present!” he said.

The pope also cautioned the international community against viewing Africa solely as a place of problems and failures. Often this perspective is fueled by prejudices, he said.

“It is tempting to point to what does not work; it is easy to assume the judgmental tone of the moralizer or of the expert who imposes his conclusions and proposes, at the end of the day, few useful solutions,” he said.

He warned of the related risk of seeing Africa only in terms of vast resources that can be easily exploited.

Relations between Christians and Muslims in Benin are generally good, and representatives of Islam were among those present at the Cotonou meeting. The pope emphasized that “everyone of good sense” understands the need for interreligious dialogue today and rejects the attempt to justify intolerance or violence.

“Aggression is an outmoded relational form which appeals to superficial and ignoble instincts. To use the revealed word, the sacred scriptures or the name of God to justify our interests, our easy and convenient policies or our violence, is a very grave fault,” he said.