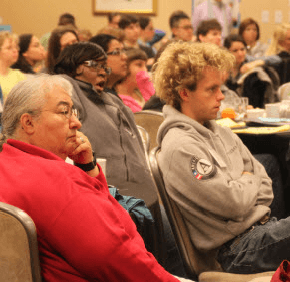 By Elizabeth Lowe
elowe@CatholicReview.org
Twitter: @ReviewLowe
Two former gang members who used to exchange gunfire have put down their guns and now trade text messages – with each other, Jesuit Father Gregory Boyle shared with more than 300 young adults who serve through Notre Dame-AmeriCorps.
These men are among the thousands of men and women who have received assistance – rehabilitation, job training and work experience, among other things – over nearly 25 years from the Los Angeles-based nonprofit Homeboy Industries, the largest gang intervention and re-entry program in the U.S.
Father Boyle, founder and executive director of Homeboy Industries, spoke Feb. 18 at the Holiday Inn Inner Harbor in Baltimore during the Notre Dame Mission Volunteers Mid-Year Training Conference Feb.16-18.
Baltimore-based Notre Dame Mission Volunteers is a federally funded AmeriCorps program.
“The Holiday Inn is not the place you come to, it’s the place you go from,” Father Boyle said.
For nearly an hour, Father Boyle reiterated the idea of kinship through his stories.
“What we’re called to do is create a community of kinship that God might recognize it,” Father Boyle said. “You stand out at the margins and you brace yourself. Rip the roof off the place so people who were outside are now inside. Presume the answer to every question is compassion.”
He continued, “Burnout is an occupational hazard when you do the kind of work that you do.”
Jordan Stables, who through Notre Dame-AmeriCorps works as a mentor, tutor and teacher’s aid at a Seattle-area high school, said “some of these students act up” and when they do, “we’ve got to put some of these kids in the margins.”
“It’s a microcosm of what’s happening in society,” said Stables, 25. “My role is what do I do about it?”
Barbie Kosiek, who through Notre Dame-AmeriCorps works with mostly low-income elementary and middle school youths at a West Chicago community center, said Father Boyle “was very real when he spoke” and the idea of kinship and mutual respect resonated with her.
“Giving people dignity is definitely what we need to break barriers,” said Kosiek, 23. “It’s awesome there are so many people here to serve the marginalized. Up until this conference, I forgot that I was still serving. I’m still reflecting on it.”
Sister of Notre Dame de Namur Katherine Corr, executive director of Notre Dame-AmeriCorps, said the conference aimed to help volunteers “think about how they’re going to carry service, even take it further. Look at our culture – it needs it. We have to keep stretching ourselves.”
Founded 18 years ago by the Sisters of Notre Dame de Namur, Notre Dame-AmeriCorps has grown from six to 390 volunteers, Sister Katherine said.
Volunteers give a year – or two – of service and receive a modest stipend.
Believing education is the key to eliminating poverty, the organization’s focuses include providing academic assistance, mentoring, job readiness training and conflict resolution.
For information about Notre Dame Mission Volunteers, visit ndmva.org, call 410-532-6864 or email natloffice@ndmva.org
Copyright (c) Feb. 19, 2013 CatholicReview.org
PrevNext