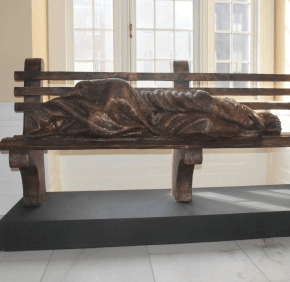 By Catholic Review Staff
Lent in the Archdiocese of Baltimore will include the exhibition of a copy of the “Homeless Jesus” statue created by Canadian sculptor Timothy Schmalz.
A lightweight, resin version of the statue will be on display in the archdiocese during the 40 days of Lent, including through March 10 at the Basilica of the National Shrine of the Assumption of the Blessed Virgin Mary in Baltimore.
Later this year, a bronze version of the artwork will be put on permanent display at St. Vincent de Paul Church in Baltimore, known for its outreach to the homeless. That gift was made possible by an anonymous donor.
Inspired by the Gospel of Matthew, the statue consists of a full-size park bench showing the prone figure of Jesus, huddled under a blanket and barefoot, crucifixion wounds visible on his feet. His face, shrouded by a blanket, is adorned with a crown of thorns.
Copies are on display around the world, including at the Vatican.
Archbishop William E. Lori “hopes it will remind Catholics and all people of goodwill that every person is made in God’s image and is deserving of respect and dignity,” said Sean Caine, director of communications for the archdiocese. “It should also be a reminder to Catholics of our call to model our behavior after that of Christ, and that others, especially the least among us, should see his face in ours.”

After the basilica, the statue will spend a week at Notre Dame Preparatory School in Towson.

Joan Carlson, upper level campus minister, said that on March 13, the first full schoolday the statue will be on campus, a longer homeroom will serve to educate the entire school community “about art as inspiration.”

“We are intending to first place the statue in our art gallery,” Carlson said, “where we have an exhibit of student art representing issues of ‘home, homelessness and displacement.’ We plan to move the statue around campus to represent that ‘Homeless Jesus’ is not just in one area; the marginalized are all around us.”

The Least of These: As weather turns, Davidsonville parishioners open doors, hearts