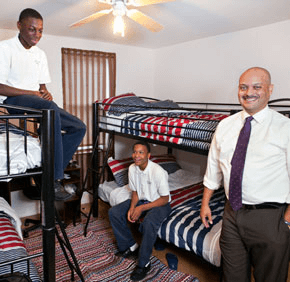 Five days after moving into his new home, Diontae Long is safe and comfortable.

Long, a freshman at St. Frances Academy, is one of 11 boys living in St. Frances’ Father Joubert Boarding House for Boys, a stone’s throw from the East Baltimore school.

“It’s a big undertaking,” said Oblate Sister of Providence John Francis Schilling, president of St. Frances. “We’ve always thought about it but have not had the place to do it. It’s going to save some boys’ lives. It’s going to impact those boys tremendously.”

In April, St. Frances learned it would receive a $157,400 grant from the Abell Foundation to pilot the program, thanks to its successful track record of placing students in colleges. The school will identify homeless young men for the house.

The grant, which paid for the house’s renovation, includes furnishings, security and tuition, food, clothing and haircuts for seven boys, Sister John said.

Seven boarders from Baltimore City were homeless, evicted or in foster care, Sister John said. Four other boys, who are Nigerian, live in the house through separate funding.

The boys, who range from freshmen to juniors, will live there until graduation.

“They (the Abell Foundation) want us to grow the program,” Sister John said. “We’re taking it slow.”

An annual grant from the Abell Foundation will sustain the program, said Sister John, who noted St. Frances is the only Catholic school in the archdiocese with a boarding school.

The house had been home to the Christian Brothers, who had a mission at St. Frances.

The Rev. Gina Dorsey, assistant house director and house mother, said “we wanted it to have a real homey feel. The doors are always open for parents.”

The three floor townhouse has 17 beds, bathrooms, a kitchen, family room and study hall room with computers. The boys are monitored around the clock.

Jamari McCullough is the house manager; Doral R. Pulley is the director; Bernie Vaughn provides relief; and the Rev. Samuel Hairston is the “floater.”

“This has been a vision of Sister John’s,” Dorsey said. “We’ve all worked together to make this happen.”

Sophomore Damarius Lewis, who lives in the house, likes its atmosphere.

“It’s fun living here,” said Lewis, 15. “It gets you ready for college because in college you’re going to be meeting different people. Everybody in the house (is) cool.”

Diontae Long, 14, is appreciative because “they keep you out of trouble.”

The boys earn privileges during the week, allowing them to relax in the family room on weekends and go on fun excursions on weekends, Dorsey said. They are required to attend church on Sundays.