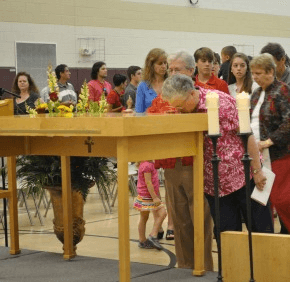 By Maria Wiering
mwiering@CatholicReview.org
GAMBRILLS – As Anne Schene handed the chalice to communicants June 8, she softly wept and wiped tears from her eyes. Among the Church of the Holy Apostles’ founding members in 1999, she has served her parish in a multitude of ways in the years since.
Now she was an extraordinary minister of holy Communion at its last Mass.
The tears came easily because of the intimacy she felt with fellow parishioners, she said after Mass. She realized she “would be giving the Blood (of Christ) to my best friends for the last time at Church of the Holy Apostles.”
The 450-household parish is joining with nearby St. Joseph in Odenton. The communities will begin worshipping as one June 15.
Founded in 1999 as a mission and named a parish in 2004, Holy Apostles regularly worshipped in School of the Incarnation’s multipurpose room. Parishioners had envisioned building their own church one day, but the Archdiocese of Baltimore deemed the cost prohibitive for the size of the parish, the Catholic Review reported in November.
In October, Holy Apostles and St. Joseph announced the two parishes would join to form a new parish that would worship at St. Joseph Church. It is expected to take a new name in 2015.
Father James P. Kiesel was the Mass’ principal celebrant. The Holy Apostles pastor was named St. Joseph’s pastor in February after the retirement of Father William L. Viola, who had served St. Joseph for nearly 15 years.
Concelebrating were Father Michael Callaghan, Holy Apostles’ founding pastor; Father Jack Bogacz, a priest of the Diocese of Trenton, N.J., who served the parish as a transitional deacon; and Jesuit Patrick D. Rogers, an Annapolis native who ministered at the parish while a chaplain at Georgetown University in Washington.
“It’s going to be a tough day for me,” Father Kiesel said as he began his homily.
He emphasized that the church is the people of God, not a place. He acknowledged that the transition is painful for many parishioners, but encouraged them to continue to see God in one another and find strength and openness in the Holy Spirit.
“Jesus gives us his own spirit, but that does not mean that we won’t feel pain,” he said.
After the homily, Rob Miller, chair of Holy Apostles’ pastoral council, presented Father Kiesel with an icon of the Apostles on behalf of the parish.
The parish warmly welcomed Father Callaghan, who joined the Order of St. Philip Neri in 2005 and leads efforts to house homeless in New York City. Speaking to the parish at the end of the Mass, he said that ministering to them was his life’s greatest privilege.
“This community, with all of its iterations, has empowered people because we’ve made room for people,” he said.
About 500 people packed the worship space, many wearing red for the feast of Pentecost. The Mass’s tone was largely joyful and upbeat, but as it came to a close many parishioners – and their pastor – were in tears.
Families processed out the parish’s bound sacrament records, followed by its sacred oils, a chalice, and a large icon of Jesus washing the Apostles’ feet. Parishioners then processed to the center of the room, where they kissed or touched the wooden altar. As they left, parishioners hugged one another, many laughing and crying.
Sister of St. Joseph Angela Case, Holy Apostles’ director of community life and adult programs, said the Mass meant “starting the next phase of our journey.”
When Holy Apostles began, Father Callaghan “told us that we’re ‘pilgrims on a journey’,” she said, “and that journey is moving on now, as hard as that is.”
Schene, 49, left nearby Our Lady of the Fields in Millersville to join Holy Apostles. It formed in anticipation of a population influx due to changes at Fort Meade, which never materialized the way the archdiocese expected.
The Schenes loved Our Lady of the Fields, but Holy Apostles was closer to their home, she said. “We went to the first Mass and never looked back,” Schene said.
Anne, her husband, Jack, and their daughters Lauren and Chrissy were drawn to the energy and welcome they felt in the fledgling community. At the first Mass, Anne Schene recalled, a friend dropped her baby’s bottle and it rolled into the center of the worship space. Father Callaghan picked up the bottle and proceeded to feed the baby as he finished his homily.
“He said, ‘I don’t mind crying babies, and I don’t mind noise; that’s who we are,’” Schene said.
In the years since, fellow parishioners have become her “best friends,” sharing all aspects of their lives together, she added.
The Schenes plan to follow the community as it travels three miles north to St. Joseph, she said. They hope to find the same joy and welcome there.
Also see:
Catholic high school graduates ready to make their mark on the world
Mount St. Mary’s seminarian creates video to foster vocations
Ursuline Sister wins singing competition on ‘The Voice’
PrevNext