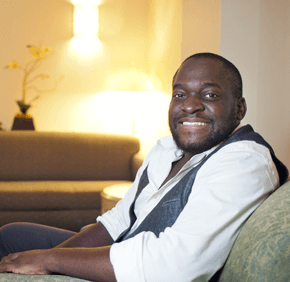 By Maria Wiering
mwiering@CatholicReview.org
Twitter: @ReviewWiering
Since June 2012, Kezia Coleman, 23, has logged about 600 hours at the Loyola Clinical Centers in Baltimore, fulfilling requirements toward a doctorate in psychology and gaining experience as a therapist.
The work confirmed her desire to work with children, said Coleman, an Annapolis native who plans to begin an externship at Baltimore’s Mount Washington Pediatric Hospital this fall. She expects to graduate in 2016.
A Loyola University Maryland clinic, the Loyola Clinical Centers, or LCC, provides hands-on clinical experience for students such as Coleman, while offering affordable treatment in the areas of psychology, pastoral counseling, literacy, hearing, speech and language.
“It’s the place where they get to take the theory (students learn in their classes) and bring it down to the reality and actually apply it,” said Janet Simon Schreck, the LCC’s executive director.
The LCC opened 10 years ago with the merger of Loyola’s psychology and speech-language pathology clinics, a milestone it will celebrate in September. Loyola’s pastoral counseling and literacy programs joined later.
Most of the students who work in the LCC are graduate students, who collaborate with and are monitored by program faculty members. Clinical hours are required for students to gain professional licensure or certification when they complete their programs.
With several programs under the same roof, the LCC takes an interdisciplinary, team-based approach to clients’ care that reflects real-world therapy approaches, Schreck said.
Patients recovering from a stroke may require help redeveloping speech and language abilities, but also need psychological care and pastoral counseling to combat depression. In other instances, psychologists and speech-language pathologists collaborate to teach middle-school students social skills.
“The best way we can impact people’s lives is to address people as a whole, and not just their individual difficulties or disorders,” Schreck said. “The common thread is that all of those pieces (from the different disciplines) work together to help people lead a meaningful life.”
The LCC was a major draw for David Essien when he applied to the Jesuit university, he said.
A native of New Rochelle, N.Y., who plans to work with people with serious mental illnesses, Essien is now beginning his third year in Loyola’s clinical psychology doctorate program.
“The program stands out from other programs I’ve seen: They give clinicians first-year experience in the clinic,” he said. “The experience at the clinic definitely gave me the opportunity to use the skills I learned in class. I can see myself growing from an apprehensive first-year to a second-year who knows what they’re doing.”
Theresa Campeggio, a speech-language pathology graduate student from Leonardtown, appreciated the direct faculty supervision while learning to work with a variety of clients, she said. Last year, she helped children with autism and Down syndrome improve their communication skills, and participated in off-site group therapy and speech and language screening.
“It was a great jumping-off point – to have that much supervision, to get your feet wet and to get a bunch of different clients,” said Campeggio, 24, who is on track to graduate with a master’s degree in 2014.
The LCC has two locations in Baltimore City and one in Columbia, and partners with schools and community agencies to provide off-site services.
In 2011-2012, it trained 192 students while serving 4,347 on- and off-site clients, including students at Archbishop Borders, Cardinal Shehan, Holy Angels, and Ss. James and John schools in Baltimore.
Clients range from infants to a centenarian. Pay is based on a sliding scale. Affordability and accessibility are core to the LCC’s mission, an approach driven by the Jesuit mandate to serve the underserved, Schreck said.
Ignatian pedagogy – teaching methods informed by the Jesuits’ founder, St. Ignatius of Loyola – also undergirds the LCC’s encouragement of students’ personal reflection, Schreck said.
“We think that to be a good therapist, you have to reflect,” she said. “We want you to spend quiet time stepping back and thinking about, ‘How did that session go? What worked and didn’t work? Did it trigger something in me that I have to think about?’ ”
The LCC prepares students for a range of professional settings, Schreck said.
“What we’re hoping is that we’re turning out students who have strong interdisciplinary skills who want to be leaders, who are reflective in their practice, and – because of our focus on the underserved – we’re hoping that in some way, they’re going to think about the injustices in the world,” she said.
See also:
Catholic schools graduate strives for work-life balance
PrevNext