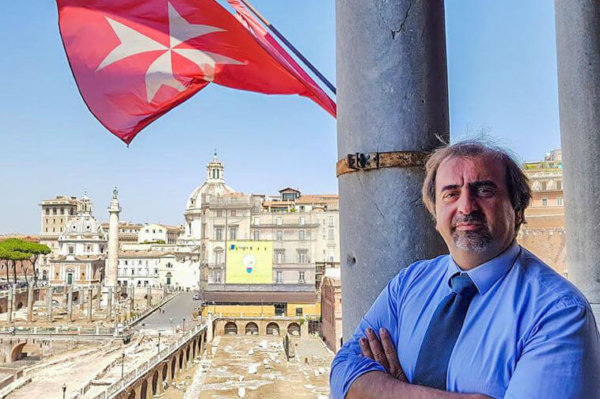 ROME — While European leaders continue to debate how to handle the influx of migrants, the head of the Order of Malta‘s Italian relief corps said that search and rescue operations are a human obligation.

Those who believe that rescuing countless refugees who escape war, hunger and persecution only encourages more people to make the treacherous voyage “often do not know what they are talking about,” Mauro Casinghini told Catholic News Service July 31.

“When you find yourself in front of a child — who could be your son or daughter — that is drowning, you would throw yourself in to save them as if they were your own,” Casinghini said.

Although the order’s relief corps has worked alongside the Italian coast guard rescuing refugees stranded at sea since 2007, the Knights of Malta humanitarian work was recently overshadowed by an internal crisis that led to the resignation of the order’s former grand master, Fra’ Matthew Festing.

Speaking at a news conference Feb. 2 following Festing’s resignation, Albrecht von Boeselager, grand chancellor of the order, said that while recent events have shown that “we are not immune to crisis in our government,” the Knights of Malta will continue placing their priority on helping migrants, the poor and the marginalized.

“People are drowning in the Mediterranean; tortured on their way. Please don’t forget to report about these cases and fight the arrogant ignorance regarding this crisis,” von Boeselager asked the media.

Casinghini told CNS that von Boeselager asked him to join the news conference to show that “despite the internal crisis, the order has never interrupted its operational activity.”

In a way, Casinghini said, the very public crisis in the Order of Malta’s governance brought new attention to the knights’ relief efforts and rescue operations in the Mediterranean Sea.

The Knights of Malta Italian relief corps counts on several teams of volunteers and doctors and nurses operating out of migrant centers in Lampedusa, Italy’s southernmost island.

Another team accompanies an Italian coast guard ship and provides round-the-clock medical assistance to migrants stranded in the Mediterranean, while a doctor from the relief corps provides medical treatment aboard an Italian naval helicopter, Casinghini said.

The order’s involvement, he explained, began after an agreement was signed with the Italian government to provide assistance. However, Casinghini told CNS that seeing an image on TV of migrants at sea clinging to a tuna cage while awaiting rescue moved him to ramp up the order’s relief efforts.

“These migrants, who were drowning, held on to this cage, but no one wanted them and nobody wanted to help them,” he recalled.

At the time, doctors were available only at medical centers in Lampedusa, which delayed rapid emergency medical treatment for those injured at sea.

After seeing the images, Casinghini called the commander of the Italian coast guard and offered to provide medical assistance teams on board the coast guard ships to care for those rescued.

Over the past 10 years, he said, the Italian Knights of Malta program has provided medical assistance to more than 355,000 people and, in many cases, “saved them from the grip of death.”

Although many refugees have met a tragic end in the treacherous waters of the Mediterranean, Casinghini said there have been sparks of hope, including the birth of children aboard the Italian naval vessels.

“To see a life born offsets so much death that we unfortunately witness,” he said.

The order’s doctors, nurses and volunteers, many of whom are starting out in their medical careers, he added, “are proud of doing this kind of work” instead of spending their first years “perhaps bringing coffee to some professor.”

“I am very proud of this mission that the Order of Malta has done for nearly 10 years because it is a mission that embraces the order’s essence from A-Z,” Casinghini said.

For more information, visit the Knights of Malta.