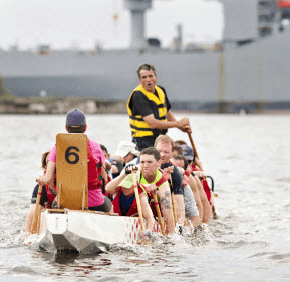 From the dock, Joani Van Tuyl’s voice could be heard shouting out the count in Baltimore’s harbor, competing only with the din of rush-hour traffic.

She perched on a narrow seat on the boat’s bow, high above the paddlers propelling the craft forward. On race day she will keep pace with a drum, but this evening she used only her voice, counting to 10.

At 6:05 p.m., the team from Harkins Builders – Van Tuyl and her coworkers – had the only dragon boat in Baltimore’s Inner Harbor, but by 6:40, seven teams were rowing long, brightly hued vessels.

The boats represented just a fraction of the 36 teams preparing for Catholic Charities of Baltimore’s biennial Dragon Boat Races, which will be held in the Inner Harbor Sept. 8.

The races are about far more than synchronization and speed. Each team is partnered with a Catholic Charities program, which is an integral part of race preparation and day-of events.

A Marriottsville-based construction management company, Harkins was the first company to commit to the races when they began. It is one of 15 teams that has rowed in every race since, always with the same partner program – Villa Maria School, which serves children ages 3 to 15 with severe emotional and behavioral problems.

Harkins hosts several annual events at the Timonium-based school, including a Halloween party, pizza party, and summer carnival and cookout. Employees also participate in school events and raise money for the program beyond their Dragon Boat fundraising.

Harkins employees ensure Villa Maria’s students get involved with the race preparation. This year students helped to create the team’s hat and will participate in the team chant, both of which will also be judged on race day.

Carol Shear, director of volunteer services at Catholic Charities, said that Harkins’ commitment to Villa Maria shows how deeply its employees care about the youths.

“Since they’ve been connected to us for so many years, everyone recognizes the Harkins name around here,” she said. “These are faces we see year after year.”

“They believe in our mission,” Ramirez said. “Not only are they a big part of this race, they’re a big part of everything that we do. They support so many of our events and programs all year long.”

Although Villa Maria is at the heart of the Harkins employees’ dragon boat commitment, a competitive spirit also drives their training and race-day attitude.

Harkins took the race seriously from the start, which set the tone for other teams, Van Tuyl said. The races are fiercely competitive now, which makes race day fun but stressful, she said. This year’s race has drawn the highest number of teams since they began in 1998.

Bruce Clopein, the paddler relations liaison for Catholic Charities’ Sarah’s Place, called Harkins “serious business” as he watched the teams practice Aug. 7. Harkins had been spotted the week before filming practice with a camera mounted to the drummer’s head.

Harkins’ team co-captain Peter Van de Castle is a member of the Baltimore Dragon Boat Club, and his knowledge of the sport is evident during practice.

“Rip through the water quickly,” he shouts as his Harkins teammates dig their paddles in the harbor.

He and other club members volunteer to coach teams on proper technique, so the paddlers use their whole bodies to row, instead of simply “canoeing” their boats, whose design originated in ancient China.

Race preparation builds camaraderie among Harkins employees, who are usually spread across several offices and worksites, said Lisa Olsen, who coordinates Harkins’ volunteer work with Villa Maria and is a parishioner of St. Louis in Clarksville.

Its non-paddling employees also volunteer on race day with technical needs and scoreboard updates. Harkins’ construction vice president Thomas Capps is chairman of this year’s event, and the company is one of its highest sponsors.

“It’s a Harkins day event for us,” Olsen said.

The races are a “great sort of festival,” Van Tuyl added. “It’s a wonderful day for Catholic Charities.”