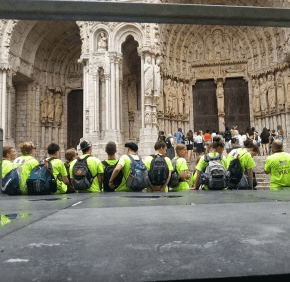 By Maria Wiering
mwiering@CatholicReview.org
HANCOCK – Near a Marian shrine high in the French Alps, Laura Haber watched as another group of pilgrims lower on the mountain processed with candles into the night reciting the Our Father.
Realizing they were speaking English, not French, she paused to pray with them.
“We just stood there, above everybody and everything, and it was just silent” besides for the prayer, she said.
It’s a memory that sticks with Haber, 33, from a recent pilgrimage to France. The pilgrimage was the third Father John “Jack” Lombardi, administrator of St. Peter in Hancock, has led for the cause of religious freedom.
A group of 13 youths and four adults traveled from Paris to Chartres, Provence and the Alps July 14-30. They went by plane, train and automobile, but also logged more than 100 miles on foot as they had in previous pilgrimages.
Father Lombardi first led a religious freedom pilgrimage in 2012 in reaction to the U.S. Department of Health and Human Services’ preventative services mandate. He and 24 others walked 100 miles from Hancock to Baltimore over eight days in July in August. In 2013, he led a similar pilgrimage from Hancock to Washington, D.C.
Father Lombardi chose France as the pilgrims’ next destination because of its Catholic history, beauty and culture. He also has family there, including a cousin who traveled with the pilgrims and translated.
The trip attracted pilgrims from St. Peter, as well as parishes in Baltimore, Hagerstown, Westminster and West Virginia. They wore neon yellow shirts printed with a seashell, a symbol of pilgrimage, and the phrase “We’re walking for YOU!” in English and French.
Jesse Walls, a 14-year-old St. Peter parishioner who walked in the prior pilgrimages, saw his participation as a witness for Christians being persecuted for their faith around the world. He believes the group’s prayers and witness may have prevented other affronts to religious freedom, he said.
“Basically, going over there wasn’t just standing up for America,” Walls said. “France and all the other counties may be different … but we all believe in one thing.”
The pilgrims arrived in France on Bastille Day, which commemorates the Storming of the Bastille in 1789, launching the French Revolution and subsequent persecution of Catholics to squelch the power the church previously wielded.
Some pilgrims researched French history before leaving, but there focused on holy sites including Notre Dame des Laus and Notre Dame de la Salette, Alpine sites where Mary is said to have appeared. While in Paris, they toured the Notre Dame Cathedral and Sacré Cœur Basilica, and volunteered with the Missionaries of Charity. They also visited the Louvre, Arc de Triomphe and Eiffel Tower, logging more than 50 miles on foot on Paris alone.
“There’s so much world to see, and God created it for everyone to see,” said Ally Haber, 12, who accompanied her mother, Laura, on the trip. “You can’t see it if you stay in one place.”
In Provence, friends of Father Lombardi’s cousin welcomed them into their home overnight and served them dinner after a storm disrupted the pilgrims’ plans to camp. The next morning, after Mass, their host thanked them for walking and inspiring him, Father Lombardi said.
“That symbolizes the charity of strangers,” he added. “When things go wrong, you rely on God’s grace.”
Laura Haber had hoped the pilgrimage would invigorate her Catholic faith, because she felt like she “was just going through the motions.”
Then, in Paris, she heard the Missionaries of Charity, sisters from the order founded by Blessed Teresa of Kolkata, describe how the room where they washed dying bodies in Kolkata had the words “the body of Christ” written on the wall.
“To me, it put it in perspective that we’re all here for his (God’s) purpose, not our own,” Haber said. “I wasn’t going to see the sites. I was going to find Christ and peace within myself.”
Asked if she did find that peace, she replied, “Yes.”
Also see:
Deacon Schultz, 80, remembered for caring nature, homilies
Bishop Rozanski’s assistant calls her longtime role ‘blessed’
PrevNext