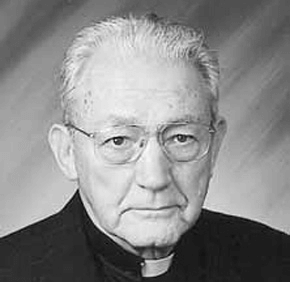 By Maria Wiering
mwiering@CatholicReview.org
UPDATED JULY 28, 2014 at 6 p.m.: A funeral Mass for Father Joseph Valentine Messer, a retired priest known as an excellent confessor and spiritual director, was offered July 21 at Church of the Ascension in Halethorpe.
Father Messer died July 16. He was 90.
Baltimore Auxiliary Bishop Denis J. Madden offered the funeral Mass.
“He was a wonderful listener,” said Zoltan Szabo, 74, a parishioner of St. Dominic in Hamilton who knew the priest for three decades. “He was a very kind person. If he gave you spiritual direction, he gave it to you very gently.”
His wife, Lia Szabo, agreed.
“He was a very, very peaceful and gentle person with a very good sense of humor,” she said.
Born in 1924 in Brooklyn, N.Y., Father Messer was one of nine children. He attended Ascension Elementary School in Halethorpe and Catonsville High School in Catonsville. In his 20s, he worked as a technician for Westinghouse Electric Corporation and served one year in the Army.
When Father Messer began studying for the priesthood in 1952 at age 28, he attended St. Charles College in Catonsville before pursuing philosophy and theology at Mount St. Mary’s Seminary in Emmitsburg.
His nephew, Jim Fitzsimmons, fondly recalls spending time with Father Messer when he was a young man. His regular Sunday visits before joining seminary “were the highlight of the weekend,” he said.
As a priest, Father Messer was always attentive to the needs of families, Fitzsimmons said.
The oldest in his seminary class, Father Messer was ordained by Archbishop Francis P. Keough in 1961 at the Cathedral of Mary Our Queen in Homeland.
He served as an associate pastor of St. Clare, Essex, from his ordination to 1970; St. John the Evangelist, Severna Park, from 1970 to 1982; St. William of York, Baltimore, from 1982 to 1986; and Church of the Good Shepherd, Glen Burnie, from 1986 to 1994. He retired in 1994 but lived at Good Shepherd until 2007, when he moved to Mercy Ridge, a retirement community in Timonium.
Father Messer was a member of the Priestly Society of the Holy Cross, an association of diocesan priests tied to the Prelature of Opus Dei.
He once shook the hand of the prelature’s founder, St. Josemaria Escrivá, who died in 1975 and was canonized in 2002. According to Fitzsimmons, Father Messer – who stood 6 feet 4 inches tall – kidded that he received “very profound words” from the future saint: “You’re a tall drink of water.”
Father Michael A. DeAscanis, vocations director for the Archdiocese of Baltimore, attended a monthly prayer group for priests with Father Messer. He called him “a man of prayer” who appreciated priestly fraternity and studying theology and philosophy.
“He was behind the scenes – quiet, humble,” he said.
An Ascension parishioner, Fitzsimmons cared for his uncle’s needs in his last years of life. He said that the priest’s memory faltered, but he “always remembered his parishioners.”
Now Fitzsimmons hopes his uncle remembers him in heaven.
“I took care of him,” he said. “Now he takes care of me.”
This article was originally published July 21, 2014.
Read more obituaries here.
Also see:
Priest who led Baltimore-based Sulpicians re-elected as superior general
Longtime Mercy volunteer concludes more than five decades of service
PrevNext