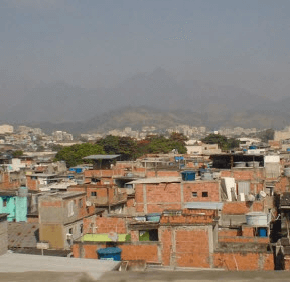 A few months ago we were invited by the World Youth Day Cinema to show our film on Our Lady of Guadalupe, The Blood & The Rose, to the pilgrims at World Youth Day 2013 in Rio De Janiero. I quickly agreed and eagerly awaited the opportunity of sharing the film with Catholic youth from around the world. Being from Baltimore, it came naturally that I was asked by The Catholic Review to cover my team’s trip to Rio World Youth Day 2013.
Rio is no short trip from Baltimore. After getting to Miami, we traveled 9 hours by plane to arrive in Rio. Upon arriving, the scene was vibrantly joyful. Groups of pilgrims descended upon Rio from all around the world excited to embark on this pilgrimage to pray and learn from Pope Francis and their fellow Catholics.
In Rio’s airport we met pilgrims from Illinois, Florida, and New York and heard the chants of countless others from around the world. Everyone was deeply excited to begin this communal pilgrimage to enter into a deeper relationship with Christ as One, Holy, Catholic, and Apostolic Church.
Upon entering Rio’s maze of a road system, we were greeted by chaotic and heavy traffic and the Cristo Redentor statue, a massive likeness of Christ, our King, opening His arms wide to Rio and the world. This was an awesome sign of the theme of this World Youth Day: “Go and make disciples of all nations.”
After getting settled into our hotel on Copacabana beach, we took time to sit and look upon the beach, overlooking the site of what will be one of the major Mass sites of World Youth Day. It is hard to imagine that tomorrow, on this beautiful white sand beach, more than a million pilgrims will be there worshipping our God, Christ the King, under the banner of so many different nations.

Copacabana Beach is one of the major Mass sites of World Youth Day. (Courtesy Renegade)
Later in the afternoon we did as many of the pilgrims choose and selected to take a trip up one of Rio’s beautiful peaks, Corcovado, upon which the enormous Cristo Redentor statue stands. Pilgrims on this day experienced extremely foggy conditions with almost no visibility.
Despite the rain, and cloud cover, pilgrims on the hill from around the world joined each other in song. They praised God and celebrated our Church and its awesome new Pope Francis even though they stood soaking wet on the cloud covered mountaintop. They sang and danced in many languages, from countries ranging from Chile to Slovakia. What an awesome testament to the power of the Holy Spirit and its fruits even in the bleakest of situations!
As the day moved forward on Monday, more and more pilgrims gathered in downtown Rio. TV screens on the beach, in hotels, and in restaurants all showed the Pope’s arrival. The excitement for the Opening Mass and the arrival of Pope Francis is creating an electric environment here in Rio. We can’t wait for the ceremonies to begin.
To read the second blog, click here.

Tim Watkins is an authentic Catholic, filmmaker and President & CEO of Renegade Communications,  a successful marketing, advertising and production firm, headquartered in Hunt Valley, Md. As a  filmmaker, Tim directed and produced the two-time Telly Award winning documentary film, The Blood  & The Rose, (www.TheBloodAndTheRose.com) with the mission to encourage each of us to raise up  as the next generation of ‘messenger eagles’ who will deliver the Gospel of Life. Along with his film’s  international debut at the 2013 World Youth Day in Rio, the film will be seen in Spain, Mexico and all around the USA. Renegade Communications also houses a Catholic marketing and communications department which develops Catholic communication campaigns and faith formation materials.
For more on World Youth Day, click here.
PrevNext