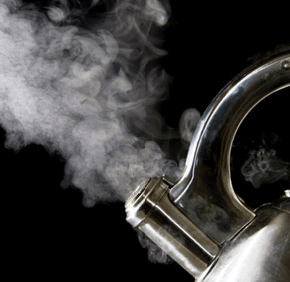 It was just a casual response by Frank Knott. When he was asked if he wanted coffee or tea, he responded simply: “Just hot water.” Suddenly a whole story from the past jumped into my mind.

Back in the 1980s I was giving a parish mission at St. Ann’s Church in Hagerstown. Coincidentally, while I was there, a guest speaker from South Africa had been invited to speak at St. Maria Goretti High School. Those were the days of racial struggle, apartheid, Mandella, Bishop Tutu, and so many other people and issues. After the talk, the speaker opened the floor to questions. No doubt expecting some question about the great issues South Africa and the world were facing, the first question actually from an adolescent girl was: “How do you manage to have such beautiful skin?” No doubt, to a teenage girl, having beautiful skin was one of the most important issues in the world. (Judging by all the advertising still going on today for skin products, it may still be one of the most important questions.)

The speaker responded: “Hot water!” He then went on to say: “You Americans have the best water in the world, but instead of drinking it, you drink all kinds of sodas.” He then explained that he just sipped hot water all day, the way someone else would sip coffee or tea. It was his “secret.” not just for good skin but for good health.

I tried this myself the other day when I had seven hours of counseling in a row. Instead of sipping coffee, which I usually do, (and sometimes still do), I sipped hot water instead. I noticed that by the end of the day I was still alert (no doubt a comfort for those talking to me) but I was without that “wired” feeling that I get when I sip caffeinated drinks.

When I tell this to others, they often suggest squeezing some lemon into the water, or adding some kind of calorie free flavoring. If we’re not careful, we will reinvent soda!

I’m telling this story, not just as a physical health issue, but as a possible spiritual practice. Lent is just around the corner. Yes, prayer, fasting, and almsgiving are the cornerstones of this penitential season. But what if we just substituted one cup of hot water a day for some other hot drink. No, it’s not wise to stop caffeinated drinks cold turkey. A priest friend did that and he suffered migraine headaches for two months. For him it was worth it: “I didn’t want to be that dependent on a drug.” It’s not worth it to me. I still like my drugs. It’s a small pleasure of life. And I also prefer small penances to big ones!

One size does not fit all, physically or spiritually. Do whatever you do with a sense of Christ’s presence in your life. Inspired by Christ’s life, love, and joy, you’ll likely make the right choice.