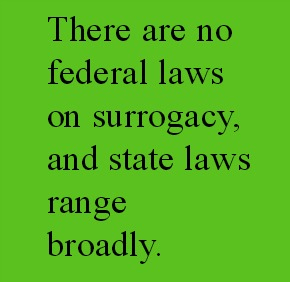 By Maria Wiering
mwiering@CatholicReview.org
ANNAPOLIS – Parent and child rights, abortion, and baby-selling are among issues coloring the debate among Maryland legislators over a gestational surrogacy bill passed by the Senate March 20 and awaiting action by the House Rules Committee.
The Maryland Catholic Conference supports the Maryland Collaborative Reproduction Act (S.B. 208) as amended, in order to protect the parties involved – intended parents, surrogate mothers and the children surrogacy arrangements produce.
As the public policy arm of the state’s Catholic bishops, the MCC does not support surrogacy, and in past years has simply opposed similar legislation.
“We would prefer a ban,” said Andrea Garvey, the MCC’s associate director for respect for life. “Right now that is not politically feasible, so we’ve tried to raise our concerns and found that many people agreed with us, that surrogacy, at minimum, has to be highly regulated.”
Garvey testified on the bill in both the Senate and House of Delegates Jan. 30.
There are no federal laws on surrogacy, and state laws range broadly. Maryland has no surrogacy laws, and does not regulate commercial surrogacy, or a pregnancy initiated through in vitro fertilization with the intention that the child will be raised by someone other than the gestating mother. The “intended parents” may pay the surrogate mother in excess of her medical expenses.
The bill passed by the Senate has been amended to include some measures the MCC advocated for: requiring a contract between the surrogate and intended parents to be drafted and receive judiciary review before the pregnancy, protecting the surrogate mother from coercion to abort, and requiring surrogacy brokers to be licensed by the Maryland Department of Health and Mental Hygiene.
Without the amendments, the bill seeks to “institutionalize the wild, wild West” of Maryland’s surrogacy landscape to favor the intended parents, Garvey said.
The Senate bill, sponsored by Sen. Delores G. Kelley (D-Baltimore County), is cross-filed with H.B. 236. The House bill, sponsored by Del. Kathleen M. Dumais (D-Montgomery County), has not been amended and has not received a committee vote.
Insufficient regulation has led to abuses by those seeking to profit from the highly lucrative fertility industry. Last year, a California surrogate broker pleaded guilty to a $2 million fraud scheme by directing clients to pay surrogates using an escrow company she clandestinely owned. She spent the money on personal purchases, leaving surrogates uncompensated and intended parents broke.
In 2011, a Chevy Chase attorney was sentenced for her involvement in a California-based baby-selling ring, where she paid women to become pregnant via in vitro fertilization in Ukraine. She then sold the unborn baby to parents interested in adopting the baby under false pretenses that the arrangements’ initial intended parents had backed out.
A new documentary produced by the California-based Center for Bioethics and Culture explores the legally- and-ethically fraught issues surrounding surrogacy. “Breeders” shares the stories of surrogate mothers (often called “gestational carriers”), who were unprepared for the emotional aftermath of separating from a child they birthed, who clashed with intended parents who wanted an abortion after a genetic defect was detected, and one who was duped into carrying another couple’s child by what she thought was an unconventional parenting arrangement between herself and a childless male friend.
Surrogacy also calls into question matters of “baby selling” and its use, in some cases, to skirt adoption laws. Opponents, including the MCC, are concerned that the industry preys on low-income women, including military wives; creates power imbalances between intended parents and the gestational carriers; and does not take into account the rights of the children born via surrogacy.
Minimum wage update
Bishop Denis J. Madden joined Lt. Gov. Anthony Brown and state faith leaders March 24 in Randallstown to advocate for raising the state minimum wage. He spoke at a similar event at St. Vincent de Paul Catholic Church in Baltimore Feb. 3. A bill to raise the minimum wage to $10.10 by 2017 passed the House of Delegates March 7 and was to be heard by the Senate Finance Committee March 26.
Also see;
When pope and president meet, what will be said?
Notre Dame of Maryland names Yam its 14th president
See our six-part ‘Playing God’ series
PrevNext