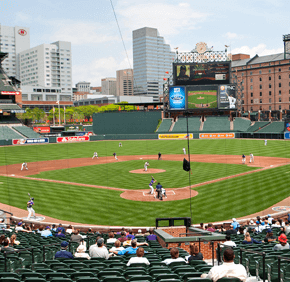 Members of the Mount St. Joseph baseball team are accustomed to seeing their alumni thrive in major-league settings.

The current Gaels did the same April 21, when they stormed back from a six-run deficit to defeat Gilman, 12-11, at Oriole Park at Camden Yards in the championship game of the second annual President’s Cup. The tournament brings together teams from parochial, private and public schools in Baltimore City.

Down 8-2, the Gaels responded with seven runs in the fifth inning. Mount St. Joseph first baseman Stephen Hostutler was named the game’s MVP, as he had three singles, reached base on a walk and scored two runs.