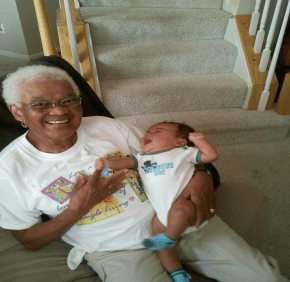 At 8 a.m. many retirees are just getting out of bed, or turning over for one more snooze, but not Helena Jordan Johnson. She is making her second lap around Lake Ashburton in northwest Baltimore.

In 1931, when the congregation of St. Barnabas Church outgrew their edifice on Biddle Street, Helena, a lifelong Catholic, walked with her parents, Louise Marie and Jerome Carter Jordan, and her two sisters, Camilla and Irene, from St. Barnabas to the larger St. Pius V on Schroeder Street.
On Sunday, July 15, 2001, the 70th anniversary of the walk, and the day after her 75th birthday, Helena walked the route again, this time with her daughters Toni, Cheryl and Jamie and their children — Nicole, Azizi and Hakeem and Irene’s eldest daughter, Carolyn.
She keeps a social schedule people decades her junior would find difficult to maintain. On Mondays she picks up her road buddy, Diane Matthews on the way to Bible Study and Mass at the newly united St. Peter Claver/St. Pius V parish.
Helena is president of the Class of 1950, a.k.a. the Nifty Class of 50, of Morgan State University. She chairs class meetings on the second Tuesday of each month. The group is currently making plans to celebrate the 65th anniversary of their graduation.
The St. Peter Claver Shining Stars joined with the St. Pius V Frolickers to become the “Frolicking Shining Stars.” Helena chairs the senior group that meets on the third Wednesday of each month. In addition to their monthly lunch and Bingo or Po-Ke-No games, the group also participates in activities the Baltimore City Department of Parks and Recreation sponsors for seniors. The group has also hosted a luncheon for senior parishioners of the five neighboring Catholic churches. Helena wrote a hilarious parody about a group of seniors at a meeting for the event.
On Thursday mornings Helena is at the Waylon Senior Center to learn more line dances. She still enjoys “cuttin’ a rug” on the dance floor.
The Beta Wives, spouses of the brothers of the Beta Sigma Tau Fraternity, meet on the second Friday of the month. Helena held the office of Treasurer with the group for many years. The group meets socially and supports two charitable endeavors: a book fund to help a college student pay for text books and visits with nursing home residents. The fund began when members of the group began helping each other buy text books for their college-aged kids. “We just never stopped,” explained Helena, “even after all of our children were out of school.”
Helena loves to sing! She has been a member of the St. Pius V Sanctuary Choir since its inception on Easter Sunday 1972. “The voice is almost gone,” she says, “but I still attempt to make a joyful noise at rehearsals each Saturday and on the first, fourth and fifth Sundays!” She was also a member of the Ecumenical Choir that sang for Pope John Paul II during his 1995 visit to Baltimore.
Father John Harfman, SSJ and Helena co-founded the group; Diamonds in Our Midst usually referred to as The Diamonds, to officially recognize church elders — persons who admit to being at least 75 years old. The group attends Mass together on the fifth Sunday of the month wearing yellow ribbons and medallions that signify their status.
Helena says she is slowing down. The past chair of the St. Pius V Liturgy Committee says, “This is the first year for as long as I can remember that I have not been a member of the Pastoral Council at either St. Pius V or St. Peter Claver.” She continues to make ribbons for the Diamonds and the Blessed Virgin Mary Sodality. Helena is also assistant treasurer of the Sodality. And, she recently made reversible stoles for the Eucharistic Ministry. “I tried to provide a color to fit each season of the Ecclesiastical calendar,” she explained.
She is an excellent baker, known for her phenomenally delicious chocolate and punch bowl cakes. In her spare time Helena likes to garden and work on her lawn. She also enjoys decorating her house throughout the year, to reflect each season or holiday being observed. (This year’s scarecrow, female of course, wore black, high-heeled tennis shoes.) Christmas is her favorite holiday and she still decorates her house inside and out, from top to bottom. Her decorations, especially the hall bannister that she actually decks with boughs of holly, Black-Angel-Bedecked Christmas trees and homemade Christmas cookies are works of art.
Helena is also great-grandmother to CJ and Mia. Her husband, the late James W. Johnson, Jr., was an active and lifelong member of Fulton Baptist Church where his many offices included chairman of the Deacon Board and Sunday School Superintendent.

When asked about her busy schedule Helena says her philosophy is, “If you don’t use it, you’ll lose it!” She says that she decided to follow this theory after observing others voluntarily stop performing tasks before ultimately losing the ability to perform the task. “If you stop, you get to the point when you can’t do it anymore. The sooner you give up, the sooner you won’t be able to do it. You can’t stop. You have to keep busy. I can’t do things as fast as I used to, but I keep on plugging along.”

Very wise words from a very wise woman. You try keeping up with her.