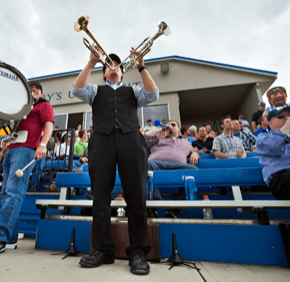 By Elizabeth Lowe
elowe@CatholicReview.org
Twitter: @ReviewLowe
After graduating from college in 2004, Chase Hilgenbrinck spent four years playing professional soccer, abroad and in Major League Soccer, the top American league.
In 2008, he ended that career to become a priest.
He entered Mount St. Mary’s Seminary in Emmitsburg.
“I hadn’t really discerned a vocation to the seminary,” said Deacon Hilgenbrinck, 31, a fourth-year theology seminarian at the Mount, “until I found myself doing everything that I dreamed of doing and realizing it didn’t satisfy me in the way I had expected.
“I began to build a personal relationship with God and pray in a way that I never had before. That’s when I realized God had other plans for my life.”
Deacon Hilgenbrinck is still able to put his soccer skills to good use, participating in an annual seminary soccer tournament. He was one of about 120 seminarians who participated in the fourth annual Vianney Cup Sept. 28 at the Mount’s Waldron Family Stadium.
To view a slideshow from the event, navigate the arrows below.
In addition to the Mount, the other teams were from St. Mary’s Seminary and University in Roland Park; St. Charles Borromeo Seminary in Wynnewood, Pa.; and Theological College, the national seminary of The Catholic University of America in Washington, D.C. The event drew more than 250 spectators.
The Mount, which won this year’s tournament 3-0 against St. Charles Borromeo in the championship, won its fifth straight Vianney Cup.
The tournament, which began about 15 years ago as a way to bring seminaries together, was originally known as The Rectors Cup, said Monsignor Steven P. Rohlfs, rector of the Mount’s seminary. The tournament widens seminarians’ scope because they meet their diocesan brothers.
“It’s really the only time that all four schools get together,” Monsignor Rohlfs said, “and that’s why it’s so much fun. And, it gives you bragging rights for a whole year.”
Besides the soccer matches, the day includes Mass, vespers and a pig roast.
“The greatest thing about the tournament is the fraternity we build between the other seminarians,” said Deacon Hilgenbrinck, who played soccer in South America, then for the Colorado Rapids and New England Revolution. “We meet and hang out with guys from the other seminaries who are on the exact same journey.”
To prepare for the tournament, seminarians from the Mount and St. Mary’s practiced for about a month, a few days each week.
Deacon Jason Hage, a fourth-year theology seminarian at St. Mary’s, was a coach for his team.
“The guys really sacrifice a lot to train,” said Deacon Hage, 27, who noted his favorite part of the tournament is Mass. “Guys are very proud to be part of their own seminaries.”
John Baab, a first-year theology seminarian at St. Mary’s, said the tournament reminds seminarians about their humanity.
“We’re human beings first,” Baab said. “We have all the human needs and one of those is physical to exercise our bodies. It (the tournament) normalizes us and gives us something to talk about with people where it’s not so easy to talk about religious matters.”
Noah Morey, a third-year theology seminarian at the Mount, called the event an evangelization tool.
“It’s good for everyone to see us in a different context, to show we’re ordinary people,” Morey said. “We can talk sports and that’s healthy because a lot of people see seminarians and priests as coming almost from a different world.”
Deacon Hilgenbrinck will be honored Nov. 13 as the 2013 CAC Courage Award Honoree at the third annual Catholic Athletes for Christ Courage Award Reception in Arlington, Va.
Also see:
Two paws up: St. John, Westminster, couple owns South Baltimore dog daycare
In Assisi, pope speaks off the cuff, encourages church to renounce ‘spirit of the world’
PrevNext