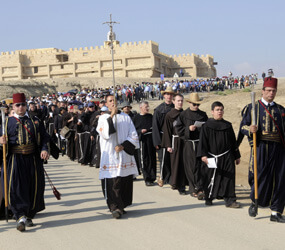 VATICAN CITY – Some 1,800 Franciscan friars from all over the world were expected to converge on the Umbrian hill town of Assisi, Italy, to celebrate the 800th anniversary of papal approval of the Franciscan rule.

For the first time, representatives from the four main Franciscan branches were to meet in Assisi – the birthplace of their founder, St. Francis – to take part in an International Chapter of Mats April 15-18.

A Chapter of Mats gets its name from the time in 1221 St. Francis called more than 3,000 friars to the Portiuncula chapel in Assisi for a general meeting or chapter.

Because the small town could not accommodate the large number of visitors, the friars lived in huts made out of reeds and slept on mats, said Father Jose Rodriguez Carballo, minister general of the Order of Friars Minor.

The three other Franciscan groups participating are the Capuchins, the Conventual Franciscans and the Third Order Regular Franciscans.

The chapter falls on the 800th anniversary of the formal founding of the Franciscan order when St. Francis presented his rule to Pope Innocent III for approval in 1209.

During a press conference April 7 at Vatican Radio, Father Rodriguez underlined the spiritual nature of the gathering and said organizers hope it will be an occasion for “coming together as a family, offering the church and the world our witness of brotherhood and celebrating our beginnings.”

With days dedicated to testimonials, penance, fasting, prayer and pilgrimage, the gathering will also be a call to conversion and to live the Gospel as St. Francis asked his disciples to, the minister general said.

Men and women religious will have an occasion to profess their continued fidelity to the pope when they meet with Pope Benedict XVI April 18 during a special audience at Castel Gandolfo, he said.

St. Francis, who was born to a wealthy family in Assisi sometime around 1181, dedicated himself to the poor and preached living a way of peace. He founded three religious orders – the Friars Minor, the Poor Clares, and the Brothers and Sisters of Penance – giving each one a special rule.

The orders evolved over time and today include:

– The first order, which is made up of three separate bodies – the Friars Minor, the Conventual Franciscans and the Capuchins.

– The second order, the Poor Clares, which includes all monasteries of cloistered nuns professing the Rule of St. Clare as well as the Sisters of the Annunciation and the Conceptionists.

– The third order, which is made up of the Third Order Regular Franciscans, a secular order and new foundations.

Father Rodriguez said while the Franciscan branches are juridically separate from one another they are united spiritually and collaborate on a number of projects around the world.

Instead of considering the orders as divided, he said they represent the diversity and plurality in the world.

“The Franciscan order flows from a very rich charism” that can find expression in many people and places, he said.

There are also countless groups, including Anglicans, Lutherans and Presbyterians, who find inspiration in St. Francis and live according to his rule, he said.

Even some Buddhists and Muslims have a special devotion to the Franciscan St. Anthony of Padua, Capuchin Father Mariano Steffan said at the April 7 press conference.

The Franciscan charism “is very open; it doesn’t make distinctions, create barriers or segregate,” he said.

However, this causes some difficulty in discernment “because when there is such a diversity of expression it’s hard to tell when you have the right balance and when you’ve gone too far,” he said.