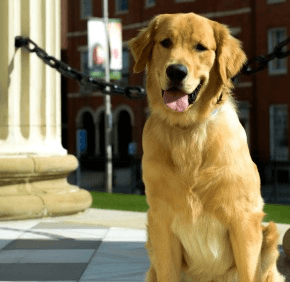 By Erik Zygmont
ezygmont@CatholicReview.org
Twitter: @ReviewErik
If we look to our dog-owning clergy, we might catch a hint of what God was thinking as he gazed at his creation and “saw how good it was.”
Father James Proffitt, pastor of St. John the Evangelist in Severna Park, got Tucker, a white Maltese/shih-tzu/ poodle mix, soon after Easter 2015.
“He’s been a real joy here – one of God’s creatures,” Father Proffitt said.
The dog is named for Ravens’ kicker Justin Tucker “as long as he’s kicking well,” the priest joked. “But if he does something scandalous, we’ll say he’s named for Friar Tuck.”

Oct. 4 is the feast of St. Francis of Assisi, patron saint of animals.
According to David McCarthy, interim associate provost and professor of theology at Mount St. Mary’s University in Emmitsburg, there is a clear biblical basis for our partnership with animals.
“I do think … that the way we like to gather in creatures and make them a part of our household families is a reflection of the human role in creation,” he said.
That role, he explained, comes from the Genesis account of creation, which gives man “dominion” over the earth.
“It means we ought to view the earth as God does,” McCarthy said. “There is theological reason to have a life-giving and harmonious relationship with creation, which includes animals.”
Father Proffitt pondered the eschatological significance of Tucker.
“He’s not baptized,” he said with a smirk. “He’s a ‘cate-canine’ – he’s got a lot of formation to go before that happens.”
In seriousness, he added, Tucker has “opened some ministerial doors.”
“People will come up and start talking about their dogs,” Father Proffitt said. “Even at the groomers or the vet – he’s opened some doors there.”
The priest acknowledged not all talk may be categorized as evangelization: “You have more conversations about going to the bathroom than you’ve ever had in your life.”
Tucker is a big hit at the parish school, where the confident dog “took over the place” Father Proffitt added.

Active lifestyle
In addition to companionship, dogs who must be exercised frequently come with another benefit.
“My doctor was very excited about my weight loss,” said Father Hook, pastor of St. Ursula in Parkville, about one effect of his beagle, Seamus.
Indeed, when the Catholic Review spoke with Monsignor Richard B. Hilgartner, pastor of St. Joseph in Cockeysville, the marathon-running priest was looking forward to a training partner in Bella, his new Labrador retriever.
He had a few prerequisites for his canine companion – adult, somewhat housebroken, athletic and black.
“It’s easier on my wardrobe,” Monsignor Hilgartner said. “I don’t have to worry about yellow Lab hair all the time.”
Monsignor William F. Burke, pastor of St. Francis of Assisi in Baltimore, has a similar affinity for Labs. Moose, a chocolate specimen, is the fourth that has lived with Monsignor Burke at St. Francis of Assisi.
“I like them,” he said. “They’re nice dogs and very pleasant with people.”
Moose greets visitors to the rectory in Mayfield with a bark.
“When he gets to know you, he lies at your feet and generally wants to be a part of your life,” said Monsignor Burke, who will lead his parish’s animal blessing Oct. 1, at 10 a.m., in Herring Run Park, across from the church.

Outtakes from the cover photo shoot with Bayley follow; Story continues below

What’s in a name

As with Monsignor Burke and his Labs, Archbishop Lori is partial to golden retrievers. As bishop of Bridgeport (Conn.), he had two, Barnes and Noble, named for his love of reading.
Barnes died before the archbishop’s installation in Baltimore, but Noble lived in Charm City for three years before he died in August 2015.
Their successor, Bayley, shown on the cover, arrived this spring, taking up residence in the archbishop’s house and accompanying him to the Catholic Center every day. At a recent town hall meeting, a rhythmic thumping puzzled staff until they turned to see Bayley at the back of Borders Hall, his tail pounding the floor as the archbishop spoke.
Bayley coincidentally shares a moniker with Archbishop James Roosevelt Bayley, who served as archbishop of Baltimore from 1872 to 1877.

Father J. Collin Poston, pastor of St. Anthony Shrine in Emmitsburg and Our Lady of Mount Carmel in Thurmont, gave a powerful name, Otto, to his tiny Pomeranian.
St. Otto of Bamberg, apostle of Pomerania, “was obedient to the pope,” Father Poston said. “I hope Otto will be obedient to me.”
Most Catholics have at some point learned, usually to their disappointment, that animals do not have immortal souls. Will barking and yapping, then, be absent from heaven?
Sister of Notre Dame LaReine-Marie Mosely, a theology professor at Notre Dame of Maryland University in Baltimore and animal lover, remembered the musings of a mentor: “If all creation is going to be renewed at the end of time, then it certainly isn’t beyond the realm of possibility that it might include some of the pets who brought us joy in this life.”

The love of a dog