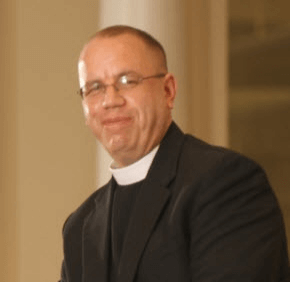 By Catholic Review Staff
Sulpician Father Gladstone H. Stevens, who attended and then served St. Mary’s Seminary and University in Roland Park from 2002 to 2008 as a faculty member and vice rector, has been named president rector of St. Patrick’s Seminary and University in Menlo Park, Calif., effective June 1.
The Provincial Council of the Society of St. Sulpice, Province of the United States, appointed Father Stevens, with approval from Father Salvatore J. Cordileone, archbishop of San Francisco and chancellor of St. Patrick’s.
Sulpician Father Thomas R. Ulshafer, Provincial Superior of the Society of St. Sulpice, Province of the United States, which is based in Baltimore, praised Father Stevens.
“He is dedicated to the priesthood and to priestly formation,” Father Ulshafer said in a statement. “His theological expertise, his experience in seminary administration and his skills in communication will serve Father Stevens well as a collaborative leader of St. Patrick’s.”
Father Stevens, 48, a native of Bridgeport, Conn., earned a licentiate of sacred theology from St. Mary’s Seminary and University and a Ph.D. from Marquette University in Milwaukee, Wis.
Ordained a priest for the Archdiocese of Louisville in 2000, Father Stevens entered the Sulpicians in 2004.
In 2008, Father Stevens joined St. Patrick’s Seminary and University as an associate professor of theology, vice rector and academic dean.
“I am honored and humbled by this appointment,” Father Stevens said in a statement. “I am grateful to Archbishop Cordileone and the Provincial Council of the Society of St. Sulpice for allowing me the opportunity to serve this venerable institution as president rector. Over the last few years I have grown to love St. Patrick’s and I am deeply committed to its mission of forming priests as men of communion for God’s holy church.”
Also see:
Archdiocese ends fiscal year in strong financial position
Actor’s addictions, lifestyle raise questions about Catholic funeral
PrevNext