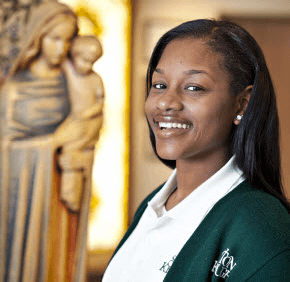 CATONSVILLE – Each August, Danielle Veney goes on a shopping spree – but not on clothes or gadgets, as her high school peers might. Instead, she fills her cart with more than $400 worth of supplies for about 120 homeless kids, paid for with her own earnings.

Veney, a senior at The Seton Keough High School, sees her act of charity as something small, but motivated by love.

Four years ago, she volunteered at Camp St. Vincent, an eight-week day camp in Patterson Park for homeless children run by St. Vincent de Paul of Baltimore. The experience inspired Veney to provide school supplies at the end of that camp, and every year since.

“It shows leadership at an early age,” said Vena Carter, the camp’s director, who said Veney’s donations relieve some of the financial anxieties of campers’ parents and give the campers confidence when going back to school.

Veney said that if she were in the campers’ position, she would hope someone would do the same for her.

“I feel like I don’t have much to give, but at the time, I had more to give because they didn’t have much,” she said of the first year she gave supplies.

Veney, 17, also spurs Seton Keough’s basketball team to serve holiday meals at the Bea Gaddy Family Center, a Baltimore soup kitchen, where they were to spend Thanksgiving this year; cleans Baltimore City streets with her church; and is starting a faith-based, nonprofit organization that pairs at-risk kids with older athletes for mentorships.

Raised in Pikesville by a single mother, Veney said mentors were important to her upbringing, especially in basketball and track, her sports at Seton Keough. She looked to uncles and older cousins to help her develop sports skills, and she thinks similar relationships could help other kids avoid alcohol or drugs. She hopes to name her nonprofit after a cousin who died last year from cancer.

“I feel like, with my nonprofit, I can help show kids the right way to go in life,” she said.

“With him (God) you have everything,” she said.

“I told her, ‘This is what it could have been like. These people have nothing. You’re really blessed,’” Doris said. “From that point on, she just wanted to give, give.”

After graduation, Danielle plans to attend college – the University of California, Los Angeles is her first choice – to study forensic science. Leaving Baltimore temporarily while getting her nonprofit off the ground does not concern her.

“Danielle has a lot of dreams, and she’s very determined,” her mother said. “She’s very committed to what she’s doing.”