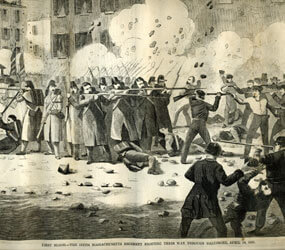 A drawing in Harper’s Magazine depicts the Pratt Street Riot in Baltimore. (From the Collection of Dr. Michael Echols)|

Days after Confederate forces in South Carolina captured Fort Sumter without any casualties, the first bloodshed in the Civil War happened in Baltimore on April 19, 1861.

The incident was sparked after an angry mob of pro-Southern Baltimoreans hurled paving stones, bottles and rocks at soldiers from the Sixth Massachusetts Regiment. The troops were traveling through the city on their way to Washington, D.C. – their rail cars pulled by horses on Pratt Street between the President’s Street Station and the Camden Street Station.

Shots were fired, and several people were killed on both sides. Baltimore Mayor George Brown ordered the destruction of railroad bridges to prevent more troops from moving through the city. Following the melee, newly elected President Abraham Lincoln put parts of Maryland under martial law and suspended habeas corpus.

Reporting on what is now known as the “Pratt Street Riot,” The Catholic Mirror (predecessor to The Catholic Review), said in its April 27, 1861 issue that the event “brought sorrow and indignation to the hearts of so many Baltimoreans.”

The newspaper, which had spoken against the breakup of the union just months earlier, described the events of April 19 as “the first bloody fruits of the coercion policy so unfortunately inaugurated by our present rulers.”

While calling for strengthened military resources in Maryland to prevent citizens from becoming “conquered vassals of warring invaders,” The Catholic Mirror also pleaded for reconciliation.

“We humbly beg Almighty God to vouchsafe to stay this fratricidal strife,” the newspaper said, “and provide some peaceful remedy for our impending evils.”

The newspaper became increasingly sympathetic to the Confederacy in the months that followed, speaking up for what it saw as states’ rights.

In his history of the Archdiocese of Baltimore, Thomas Spalding pointed out that the Mirror’s publishers, Michael J. Kelly and John B. Piet, would be twice arrested for printing works of a “treasonable character.” They were detained in Fort McHenry during one of those arrests.

In the April 27 issue of the Mirror, an official notice from Thomas Foley, secretary to Archbishop Francis Patrick Kenrick, reported that the archbishop directed that the prayer for peace be added in the Mass at all churches, “in consideration of the disturbed state of the country which is threated with the calamities of civil war.”

“He recommends to all religious communities the daily recital of the Litany of Saints for the same purpose,” the notice said, “and to all the faithful of his charge, earnest prayer to God to direct the counsels of our rulers and all those in authority to peace.”

Several museums in Baltimore are featuring displays and events related to the Pratt Street Riot and the start of the Civil War. Visit www.civilwarbaltimore.com.