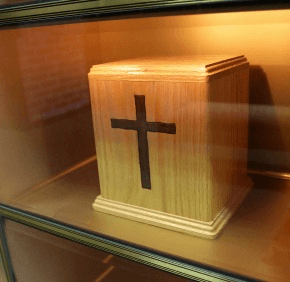 By Cindy Wooden
Catholic News Service
VATICAN CITY – Professing belief in the resurrection of the dead and affirming that the human body is an essential part of a person’s identity, the Catholic Church insists that the bodies of the deceased be treated with respect and laid to rest in a consecrated place.
While the Catholic Church continues to prefer burial in the ground, it accepts cremation as an option, but forbids the scattering of ashes and the growing practice of keeping cremated remains at home, said Cardinal Gerhard Muller, prefect of the Congregation for the Doctrine of the Faith.
“Caring for the bodies of the deceased, the church confirms its faith in the resurrection and separates itself from attitudes and rites that see in death the definitive obliteration of the person, a stage in the process of reincarnation or the fusion of one’s soul with the universe,” the cardinal told reporters Oct. 25.

Father Patrick Carrion, director of cemeteries for the Archdiocese of Baltimore, said the congregation’s guidelines have “all along been the understanding.”

“Now, they’ve codified it,” he said. “What the church wants is that we treat the ashes the same way we we would treat a body.”

In 1963, the congregation issued an instruction permitting cremation as long as it was not done as a sign of denial of the basic Christian belief in the resurrection of the dead. The permission was incorporated into the Code of Canon Law in 1983 and the Code of Canons of the Eastern Churches in 1990.
However, Cardinal Muller said, church law had not specified exactly what should be done with “cremains,” and several bishops’ conferences asked the congregation to provide guidance.
The result, approved by Pope Francis after consultation with other Vatican offices and with bishops’ conferences and the Eastern churches’ synods of bishops, is “Ad resurgendum cum Christo” (“To Rise with Christ”), an instruction “regarding the burial of the deceased and the conservation of the ashes in the case of cremation.”
Presenting the instruction, Cardinal Muller said, “shortly, in many countries, cremation will be considered the ordinary way” to deal with the dead, including for Catholics.
Cremation, in and of itself, does not constitute a denial of belief in the immortality of the soul and the resurrection of the body, the instruction says. Nor does it “prevent God, in his omnipotence, from raising up the deceased body to new life.”
However, the Catholic Church wholeheartedly recommends continuing the “pious practice of burying the dead,” Cardinal Muller said. It is considered one of the corporal works of mercy and, mirroring the burial of Christ, it more clearly expresses hope in the resurrection when the person’s body and soul will be reunited.
In addition, he said, when a person is buried in the ground — and, at least to some extent — when the urn of the person’s ashes is placed in a columbarium or tomb, the final resting place is marked with the person’s name, the same name with which the person was baptized and by which the person is called by God.
“Belief in the resurrection of the flesh is fundamental,” he said. “A human cadaver is not trash” and an anonymous burial or scattering of ashes “is not compatible with the Christian faith. The name, the person, the concrete identity of the person” is important because God created each individual and calls each individual to himself.
In fact, when asked if there was any way to rectify the situation when a person’s ashes already had been scattered, Cardinal Muller suggested making a memorial in a church or other appropriate place and including the name of the deceased.
What is more, he said, labeling an urn or tomb in a public place is an expression of belief in the “communion of saints,” the unending unity in Christ of all the baptized, living and dead.
“Other believers have a right to pray at the tomb” and to remember deceased members of the Catholic Church on the feast of All Saints and All Souls.
Keeping ashes at home on the mantel, he said, is a sign not only of love and grief, but also of not understanding how the loved one belonged to the entire community of faith and not just to his or her closest relatives.
“Only in grave and exceptional cases,” the instruction says, local bishops may give permission for ashes to be kept in a private home. Cardinal Muller said it was not up to him, but to local and national bishops’ conferences to determine what those “grave and exceptional” circumstances might be.
Placing the ashes in a sacred place also “prevents the faithful departed from being forgotten or their remains from being shown a lack of respect,” which is more likely to happen as time goes on and the people closest to the deceased also pass way, the instruction said.
Asked specifically about the growing trend in his native Germany of “forest burials,” where people pay to have their ashes in urns interred at the base of a tree in a designated forest burial ground, Cardinal Muller said the German bishops were not thrilled with the idea, but accepted it with the proviso that the tree be marked with the name of the person buried at its base.
In the United States and other countries, a growing number of Catholic cemeteries set aside sections for “green burials” for bodies that have not been embalmed and are placed in simple wooden caskets that eventually will biodegrade along with the body.
“We believe in the resurrection of the body and this must be the principle of our understanding and practice,” Cardinal Muller told Catholic News Service, noting that there is a difference between allowing for the natural decay of the body while protecting the environment and seeing the body of the deceased primarily as fertilizer for plants and trees.
Copyright ©2016 Catholic News Service/U.S. Conference of Catholic Bishops.

Erik Zygmont contributed to this article.