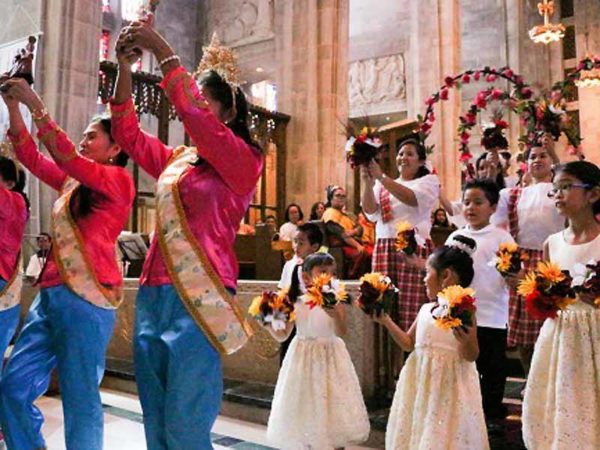 The sixth annual Archdiocese of Baltimore Filipino Saints Fiesta Celebration at the Cathedral of Mary Our Queen in Homeland Sept. 25 wove together culture and faith.

A visible joy spread across the standing-room-only crowd, a spirit embodied by Sts. Pedro and Lorenzo, according to Archbishop Lori.

“You (the Filipino community) have brought to these shores the joy of the Gospel,” he said in his homily, “A joyful courageous faith personified by your two intrepid missionary saints.”

Archbishop Lori reminded everyone that like the Filipino saints, it is lay people who are called to bring the joy of the Gospel into the world.

“Pope Francis challenged the whole church to undergo what he called a missionary transformation,” the archbishop began. “He’s calling upon you and me to be true followers of Jesus, to open our hearts to him, encounter in them love and then go into the world with missionary joy.”

That joy was evident after Mass. Father Pete Literal, chaplain of the AFC, led a procession around the cathedral with the statues of Sts. Pedro and Lorenzo enthroned on beds of roses, carried high for all to see.

Father Literal was encouraged by the turnout for the fiesta, which drew groups from New Jersey, Philadelphia and Virginia for a celebration that included nearly 50 organizations.

“I’m truly impressed by the cooperation of all the organizations,” Father Literal
said. “These are not only religious groups. These are civic and professional groups.”

Ruben Ballesteros, former chairman of the AFC, noted that the population of The Philippines is almost 85 percent Catholic. He said the celebration began as a way to “Organize the Filipino groups in this area so that we are able to exercise and have strength in our faith according to our traditional Filipino customs.”

Many of those customs were displayed on the cathedral’s plaza, where people lined up at tents where the offerings whole roasted pig. Amid the eating and mingling, the plaza was transformed into a stage where individuals sang in various dialects and groups performed both traditional and modern dances.

John Smith, the current AFC chairman, says he is inspired when people tell him they see the celebration as prayerful and meaningful, and predict that they will bring others next year.

“They are an example, not only to other Filipinos,” Smith said, “but to everybody else in the archdiocese by their faith.”

In hopes of strengthening the Filipino community, the AFC is expanding beyond the yearly fiesta. On Nov. 5, it will hold its inaugural summit of Filipino leaders, partners and supporters of Filipino ministries in the archdiocese. Archbishop Lori will be the keynote speaker at the Faith and Leadership Assembly for Renewal and Empowerment summit at St. Michael the Archangel in Overlea.