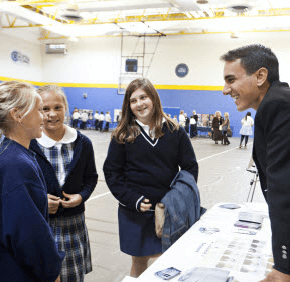 Baltimore Archbishop William E. Lori told nearly 500 fifth-graders from Catholic schools across the Archdiocese of Baltimore Oct. 12 that he remembers being a young boy, riding on a bus and looking out the window when he heard Jesus calling him to religious life.

“I was your exact age when Jesus knocked on the door of my heart,” Archbishop Lori said. “You are not too young to begin asking the Lord Jesus, ‘What do you want me to do with my life?’ ”

“The purpose is to expose them to religious sisters and priests … and talk about the possibilities of considering religious life and the priesthood,” said Sister Patricia, who noted clergy and religious are “ordinary people who have responded to a call from God.”

Focus 11 targets fifth-graders, who are typically age 11, and 11th-graders because many priests and religious recall they were in these grades when they first thought about religious life, Sister Patricia said.

The third and final Focus 11 for fifth-graders is expected to be held in 2013, said Sister Patricia, who noted the event aims to reach every fifth-grader in the archdiocese. As early as 2014, Focus 11 may begin for 11th-graders.

The event featured prayers, songs, Liturgy of the Word, a skit and two panel discussions with priests, deacons, brothers and sisters.

In his homily, Baltimore Auxiliary Bishop Denis J. Madden told the students, “When you become a priest or a sister or a brother, your life takes on a joy and happiness you never knew before.”

Father Michael A. DeAscanis, vocations director for the archdiocese who was a member of one of the panels, talked about his life as a civil engineer before he discerned a call to the priesthood, what priests do for fun – friendships, sports, travel – and the education required to be a priest.

“It all starts now,” said Father DeAscanis, who told the fifth-graders it’s important for them to work hard and get good grades in school.

David Nakasone, a fifth-grader at Monsignor Slade, learned that “everyone has a calling.”

Susan Nakasone, David’s mother, said “It’s neat they’re being exposed to it (vocations) at this young age. They’re getting a side that it’s everyday life.”