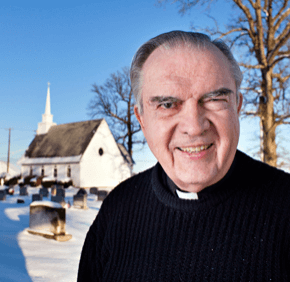 In a quarter-century as pastor of St. Michael in Poplar Springs
By George P. Matysek Jr.
gmatysek@CatholicReview.org
POPLAR SPRINGS – When Mary Ann Gehle’s brother-in-law was killed in a farming accident 18 years ago, her pastor at St. Michael in western Howard County helped her family through the tragedy simply by being present.
“He sat and talked with us,” Gehle remembered, calling the priest’s compassionate presence and assurance of prayer “very comforting.”
“He’s always there for his parishioners,” Gehle said. “That’s where his heart is.”
Father Michael J. Ruane, the man cherished by the Gehle family and others, has been St. Michael’s leader for a quarter century.
One of the longest-serving pastors of a single parish in the Archdiocese of Baltimore, the 70-year-old Baltimore native will mark his anniversary at St. Michael with a special Mass celebrated by Bishop Mitchell T. Rozanski Dec. 28 at 5 p.m. – 25 years to the day when Father Ruane first reported for duty.
The easygoing priest, who admitted he didn’t even know where Poplar Springs was when he heard of his new assignment, has overseen tremendous growth. Fueled by the spread of the Washington, D.C., and Baltimore suburbs, the number of registered families has grown from 600 in 1988 to nearly 1,600 today.
Father Ruane led a successful Heritage of Hope capital campaign to erect a religious education wing and multipurpose building. He also oversaw the restoration of the parish’s small church that dates to 1879. Today, the historic church is used for daily Mass and other liturgies, while a larger church built in 1983 serves as the main sanctuary.
The parish is currently completing the archdiocesan “Embracing the Mission-Shaping the Future” capital campaign, with plans to use its share to renovate the front church entrance walkway, upgrade the rectory and make other improvements.
Father Ruane said he has been inspired by parishioner generosity, not only to the capital campaigns, but also by their response to his ongoing call to ministry.
“I try to accept people where they are and respect their talents and include them in ministry,” Father Ruane said. “It’s a collaborative, collegial style.”
Gehle noted that the pastor’s approach works. It’s not pretentious, demanding or overpowering, she said.
“He’s more of a servant who enables the laity to participate in the life of the church,” she said. “He sees God has a plan for everyone, and he likes to watch that unfold and affirm it.”
William “Sonny” and Betsy Richardson, a couple married by Father Ruane who often played tennis with the priest, said parishioners appreciate his outreach. Sonny Richardson remembered that before the priest’s elderly mother had to relocate to a hospice, she lived with him in the rectory in her later years. When Father Ruane was visiting his dying mother in the hospice, Richardson said, a stranger asked him to pray with her family – and he obliged.
“He spent an hour with her family,” he said. “That’s the kind of person he is.”
Father Ruane said he has no other desire in life than being a parish priest. He has no plans to retire.
“I like to be with people at significant transitions in their lives,” he said, “which means, basically, the sacraments.”
He’s been touched by the “25 for 25” campaign that some parishioners started. It asks each family to donate $25 to Father Ruane in honor of his 25 years. The money will help him purchase a new car to replace his 11-year-old Ford Taurus.
“The response has been phenomenal,” he said. “The expression of appreciation has been overwhelming. You never know, really, how you are affecting people until something like this happens.”
Also see:
Ellicott City parish celebrates long history
Monsignor Miller, ‘mountain of a man,’ laid to rest
PrevNext