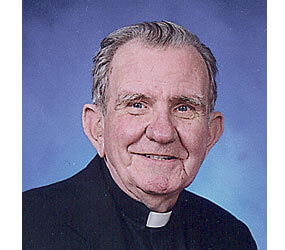 Father Charles Lafferty loved to go all out on Halloween.

As pastor of St. Ignatius in Hickory from 1979 to 1992, the priest dressed up in a black cape and turned an old attic into a “haunted house” that delighted parish children.

“He would throw his cape around his face – Dracula style,” remembered Joan Strickroth, religious education administrator under Father Lafferty. “The girls would squeal and the boys would say, ‘I know who you are!’ ”

Father Lafferty would then unveil an apple for each child that he collected from a local orchard.

“Everyone loved him,” Strickroth said. “We had CCD on Tuesdays, and every Tuesday, that man was out there giving the kids high fives.”

Parishioners of St. Ignatius are mourning the loss of their longtime pastor, who died Aug. 17, a few days short of his 82nd birthday. Bishop Mitchell T. Rozanski was to offer a funeral Mass Aug. 22 at Stella Maris in Timonium, with interment to take place at St. Ignatius’s cemetery.

Father Lafferty attended St. Katharine of Siena School in Baltimore before entering the minor seminary at St. Charles in Catonsville. He later studied at St. Mary’s Seminary on Paca Street and Roland Park. Archbishop Francis P. Keough ordained him to the priesthood in 1955.

Father Lafferty’s early assignments were as associate pastor of St. Clement Mary Hofbauer in Rosedale and St. John of Arc in Aberdeen. He was a religion teacher at The John Carroll High School in Bel Air from 1965 to 1969.

In a letter written on his 50th anniversary as a priest, Father Lafferty outlined his eight-point philosophy of life, which included injunctions “be a person that the hurting can trust” and “don’t preach until you really listen.”

“He was a priest who wanted to get out and be with the people,” remembered Larry Wilson, a former chair of St. Ignatius’s parish council. “He was always smiling and always shaking hands before and after Mass.”

Wilson noted that Father Lafferty was not a “bean counter.” He delegated administrative responsibilities to those he trusted so he could focus on his pastoral duties.

“He was smart enough to know what he couldn’t handle,” Wilson said, “and he surrounded himself with people who could handle it.”

Father Lafferty never asked for money, Wilson said. During an annual stewardship day, the priest would make one simple statement: “If you like what you see and you’re happy here, then you’ll give.”

“That was the extent of his talk of finances,” Wilson said with a laugh, noting that parishioners responded to Father Lafferty’s simple appeal.

Raymond E. Wanner, the founding principal of The John Carroll School, hired Father Lafferty to be part of the school’s early faculty.

“He was a very good person and I always had confidence in him,” Wanner said. “He was a dependable and uncomplicated person – in the best sense of the word. He was always available to others.”

Strickroth said her former pastor will be missed. Her husband, Jerry, added that Father Lafferty leaves a loving legacy.

“He was easy to get along with,” Jerry Strickroth said. “He was a good man.”