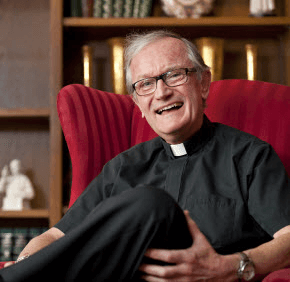 By George P. Matysek Jr.
gmatysek@CatholicReview.org
There’s not a day on Father Joseph Breighner’s calendar that isn’t packed with ministry.
The 68-year-old priest writes columns for the Catholic Review and CatholicReview.org, offers pastoral counseling several times a week, leads spiritual retreats and celebrates Mass at Villa Assumpta, Notre Dame of Maryland University and Church of the Annunciation in Rosedale.
“I’ve created this kind of hectic lifestyle,” said Father Breighner, taking a few minutes for an April 15 interview at his Cathedral of Mary Our Queen residence in Homeland before dashing off to celebrate Mass at nearby Notre Dame University.
“My life has been a ministry,” he said. “It’s a blessing. It’s also a two-edged sword.”
Father Breighner’s outreach has been demanding. He believes the strokes he suffered in his eyes in 2002 and pulmonary embolisms in 2009 are partly stress-related. Taking that into account, the priest decided to retire last month. The official retirement took effect March 1, but don’t expect him to slow down too much.
“Retirement will hopefully give me psychological permission to begin to say no to some things and do a little bit less – maybe beginning by taking a half a day a week off,” the priest said with a laugh.
Father Breighner first wrote columns for the Catholic Review while he was a seminarian in the late 1960s. Over the last several decades, his musings have become one of the Catholic Review’s most popular features in print and online.
“I try to tell the fundamental message of Jesus,” he said, “that God is love and so are we, and when we live from a place of love, that transforms things.”
Father Breighner grew up in Our Lady of Mount Carmel Parish in Essex, where he was inspired to become a priest by observing the ministry of the priests who served there.
“Seeing the impact they had on other people – especially the priests who told jokes and had a lot of rapport with people – I knew that’s what I wanted to do,” said Father Breighner, author of several books. “I wanted to make God accessible to people.”
Father Breighner prepared for the priesthood at St. Charles College in Catonsville, St. Mary’s Seminary on Paca Street and St. Mary’s Seminary in Roland Park.
Ordained in 1971, his early assignments included stints as associate pastor of Shrine of the Little Flower in Baltimore and St. Charles Borromeo in Pikesville.
From 1979 to 1989, Father Breighner was the coordinator of evangelization for the Archdiocese of Baltimore. For 35 years, the priest hosted a radio program on WPOC that offered spiritual reflections based on popular country songs. He earned a certificate in pastoral counseling from the Institute of Pastoral Psychotherapy in Washington, D.C., helping people deal with a wide range of issues including loneliness, illness, the trauma of divorce and the death of loved ones.
“It’s powerful stuff to help people realize that they are never alone in the darkness,” he said. “Christ is always with us.”
In his retirement, Father Breighner will continue writing his column. He also expects to continue all his other activities, although at a reduced volume.
“I often say in my column that our lives pass very quickly,” he said. “We do the good while we can do it, then we pass the torch to another generation.”
PrevNext