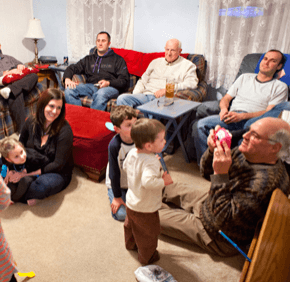 By Elizabeth Lowe
elowe@CatholicReview.org
Twitter: @ReviewLowe
Little did Dennis Robinson Jr. know that when he became a sacristan at St. Michael the Archangel in 1989 that the relationship he formed with Monsignor Thomas J. Tewes would blossom.
Within a few years Monsignor Tewes, pastor of the Overlea parish from 1984 to 1992, became a part of the Robinson family, which included the two parents and five children. The family has nearly tripled in size and now includes spouses, a fiancé and eight grandchildren.
“It’s hard to pinpoint why it (the relationship) developed,” said Dennis Robinson Sr., 61, who worships at St. Michael with wife, Barbara. “We just hit it off.”
Monsignor Tewes has become a fixture over the past two decades, as the Robinsons and the 79-year-old priest have traveled, spent holidays and enjoyed hundreds of meals together.
“It has been a good relationship and a great friendship, one that has endured,” Monsignor Tewes said. “I’ve become a part of the family.”
As the family has grown and spread out, Sunday dinners at the Robinson’s Overlea home are less frequent, but rousing games of Trivial Pursuit live on in the collective memory.
“We were famous for being partners,” Robert Robinson, 32, one of the five siblings, said of he and Monsignor Tewes teaming in the popular game. “It was never a doubt we were going to be partners.”
On Wednesday evenings in the 1990s, Monsignor Tewes stopped by the Robinson home to watch “Law and Order.” For the past 20 years, the Robinsons have vacationed with Monsignor Tewes at his beach house in Fenwick Island, Del.
“He’s been very generous with that,” Dennis Sr. said. “It’s a standing invitation.”
Monsignor Tewes taught the five siblings to water ski.
“I had a boat and I would take the kids water skiing all the time,” said Monsignor Tewes, who has vacationed with the family at Deep Creek Lake.
On one trip to the Western Maryland resort, Monsignor Tewes and Robert jumped on an inflatable raft and traveled across the lake.
“I don’t know what possessed us to do it, but we did,” said Robert, director of marketing and communications at Loyola Blakefield in Towson. “We got to the other side – finally. We did it for no reason. We turned around and went back. We still joke about it.”
In April, Dennis Jr. and Robert took Monsignor Tewes, an avid golfer, to the Masters in Augusta, Ga.
“It was a ‘bucket list’ item, so to speak, for him,” Robert said.
Most holidays include Monsignor Tewes, who said, “I stop here every Christmas.”
He is there for the family in good times and sad, as he administered last rites to Dennis Sr.’s mother in May 2012.
“He has been there through everything – the marriages, the baptisms, the funerals,” said Dennis Jr., 38, a parishioner of St. Stephen in Bradshaw. “When you look at the family dinners, the birthday parties … He was at my house for Thanksgiving, he comes for the Super Bowl, he is one of us.”
In turn, the family supports Monsignor Tewes.
When he has moved, most recently to Perry Hall, the Robinson siblings have helped. In June, the family attended his 50th jubilee at the Basilica of the National Shrine of the Assumption of the Blessed Virgin Mary in Baltimore.
While technically retired, Monsignor Tewes, who pastored at three other parishes, celebrates Mass at St. Michael; St. Mark in Fallston; Church of the Annunciation in Rosedale; Oak Crest Retirement Community in Parkville; and at parishes on the Eastern Shore.
“He is everybody’s priest,” Dennis Sr. said. “He happens to be a priest and our friend at the same time.”
PrevNext