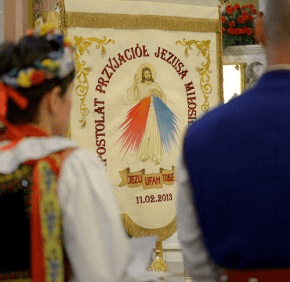 The miraculous, however, was also close at hand for anyone in need of a little boost to their faith.

Lansdowne resident Joseph Hooe attended the liturgy – which included a bilingual Mass (English and Polish), a recitation of the Divine Mercy chaplet and a eucharistic procession inside the church – at the behest of his mother, Ann O’Neill.

As a young girl, she was suddenly cured of acute lymphatic leukemia on Good Friday in 1952 after a last-ditch pilgrimage to Emmitsburg and prayers to St. Elizabeth Ann Seton, then not yet canonized.

Hooe related the story as his mother waited in one of several lengthy lines to receive the sacrament of reconciliation, also a key feature of Divine Mercy Sunday.

“My mom goes to church every day, sometimes twice,” Hooe said. “There are doubters in this world, but she’s been touched – she knows God exists, and that there’s something beyond this life.”

Baltimore Archbishop William E. Lori, officiant for the Mass, observed that doubt pervades the times in which we live. Our culture, which affects us all, the archbishop said in his homily, “doubts the need for God’s mercy, and sometimes doubts the power of God to forgive our sins.”

Quoting Venerable Fulton J. Sheen, Archbishop Lori said “the most dangerous sin in the world today is the denial of sin itself.”

He added that others believe that their difficult personal situations – whether they involve family or work – are simply beyond forgiveness.

A woman kneels in prayer following confession at Holy Rosary Church during the April 3 Divine Mercy Sunday celebration. The Fells Point parish is home of the Archdiocesan Shrine of the Divine Mercy. (Kevin J. Parks/CR Staff)

The archbishop affirmed that both notions are false, invoking the words of St. John Paul II: “The love of Christ crucified is stronger than sin, and more powerful than death.”

He added that Divine Mercy Sunday is an opportune time to overcome doubt.

“On this Mercy Sunday, through the lens of St. Faustina, Jesus is in our midst inviting us to touch his wounds,” Archbishop Lori said, referencing the Polish nun, canonized in 2000, responsible for inspiring the growing devotion to Divine Mercy, based on the visions she received of Jesus Christ in the 1930s.

Holy Rosary Parish, home of the Archdiocesan Shrine of the Divine Mercy, was integral to St. Faustina’s canonization. In 1995, then-pastor Father Ronald Pytel received miraculous healing of a heart condition after much devotion to then-Blessed Faustina and prayer for her intercession. Father Pytel died of kidney cancer in 2003.

Concelebrants included Father Ryszard Czerniak of the Society of Christ, who took over as pastor of Holy Rosary in August. He told the Catholic Review the church had been offering a Divine Mercy Novena – each day of which the Chaplet of Divine Mercy is prayed – over the nine days prior to Divine Mercy Sunday.

“It’s very important to pray and ask Jesus for the graces given to us by Divine Mercy,” said Father Czerniak, 42, a native of Rzeszow, Poland.

The priest, who served in Chicago, Detroit and Atlanta before Baltimore, said he was deeply impressed by the apparent devotion in the faithful who established Holy Rosary in 1887 and a parish elementary school soon after.

“I see them as having two things that are important – God and the future for their children,” Father Czerniak said.

Father Czerniak also said that he is “impressed” by Holy Rosary’s current parishioners, as well as those who stop by for the sacrament of reconciliation and daily Mass on weekday evenings.

“For me, this is a sign people are looking for God,” he said. “I am looking at their faith, their worship and their prayer, and I can say I’m very happy to be here.”

How to pray the Divine Mercy chaplet